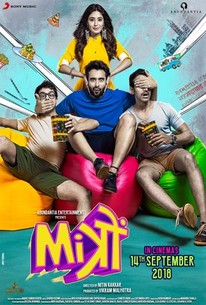 A love story set up in the Gujarati milieu of a couple as different as chalk and cheese. Jay, born and brought up with middle class values and upbringing, keeps an 'unrestrained' and 'take it easy' approach to life. He does not want to go behind the herd mentality and aims of becoming a chef. Seeing his free and easy approach, his father decides to bring stability in his life, thus plans to get him married. But destiny has something else in store. He accidently meets Avni, an ambitious, MBA graduate and strong headed girl. To Jay's surprise, Avni reveals to him that she is not interested in getting married and wants to start her own business. A disappointed Jay leaves the scenario and decides to move on in life and finds yet another born rich girl in a well to do family. But there too, he gets challenged as his would be father in law asks him to prove his worth first. Left with no choice, Jay seeks Avni's help and they decide to start a business in partnership. And this all leads to a genesis of food truck business. It's a romantic comedy where everyone in the film, from the lead to the little fellow whose small act of closing a door unlocks opportunity to Avni and Jay. Their tryst ends in a happily-ever-after saga.

Bhumika Dube
as Shravanti
View All

Mitron is strewn with hints of what it might have been if it had been better cast. Hindi cinema tends to be very culturally insular...

If you want to go to a movie this weekend where you can also take a nap for 15 minutes...

With an extremely guessable plot and a not enough laughs to match, Mitron is a film you would recommend to those friends you want to get back at!

Reza Noorani
The Times of India

In short, watch this relatable comedy with your family, and come back with the laughs and a better understanding of generational gap...

There are no featured audience reviews yet. Click the link below to see what others say about Mitron!