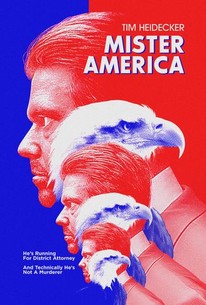 Critics Consensus: Mister America misses a number of its targets, but fans of Tim Heidecker's unique brand of comedy will find moments worth savoring in this dry political satire.

Critics Consensus: Mister America misses a number of its targets, but fans of Tim Heidecker's unique brand of comedy will find moments worth savoring in this dry political satire.

Critic Consensus: Mister America misses a number of its targets, but fans of Tim Heidecker's unique brand of comedy will find moments worth savoring in this dry political satire.

A freshman filmmaker follows Tim Heidecker during the final month of his campaign for district attorney. What begins as a profile of an outsider candidate facing an uphill battle evolves into a study of toxic delusion as Tim's motivations and controversial past begin to unravel his candidacy. Taking on a popular incumbent has found Tim and his inexperienced campaign manager outmatched. Low on funds, experience, and connections, Tim hits the streets in an attempt to connect with voters, but has difficulty winning over the community. With word of his campaign spreading, former associates of Tim try to warn the public with stories of bad business deals, strained friendships and a failed court case in which he found himself accused of murder. With days until the election and his campaign in free-fall, Tim has to confront the unexpected costs of pursuing his dream.

Running only a little shorter than the average season of On Cinema At The Cinema, it's never as cringe-inducingly funny or inventive as the webseries that spawned it.

Prolific actor-comedian-musician Tim Heidecker may have a sizable cult following but it's doubtful he'll find many new fans with his latest effort, the tedious and laugh-free mockumentary "Mister America."

Heidecker's comedy thrives in the liminal space between what's supposed to be funny and what's not, and the one thing he can't afford to do is stop to explain the joke.

Mister America ambles through two overlapped realities (On Cinema's and our own) and reveals a pathos that makes its dry political comedy accessible beyond an ingrained fanbase, if not poignant.

A witless, one-note political satire whose deficiencies are even more glaring when such humor feels entirely redundant to our current state of affairs.

Although "Mister America" has inspired moments throughout, Tim's ignorance, insensitivity and ill-fitting tailoring aren't really good for 90 minutes of laughs.

To anyone who doesn't find this to their taste, this can be weird, if not outright alienating. For those who can appreciate it, this is an unquestionable masterpiece.

If Heidecker's not holding a mirror up to our idiocy Borat-style, there's no mistaking the echoes in a thin-skinned, name-calling brute elbowing his way onto political center stage for the ugliest reasons.

There's no additional wit here, no insider perspective and no investment in character. Most of what we're presented with was improvised and that's what it looks like -- a small group of not particularly charismatic actors winging it.

At best, it plays like a bizarro version of The War Room.

Mister America does provide the most succinct summation thus far of the On Cinema mythology, even if it can't quite approximate the experience of the show itself.

The film means to deride that power through representation and succeeds -- but too well, both for its own good and the good of the audience.

There are no featured reviews for Mister America at this time.