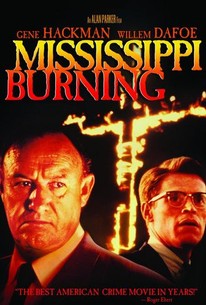 Critics Consensus: Mississippi Burning draws on real-life tragedy to impart a worthy message with the measured control of an intelligent drama and the hard-hitting impact of a thriller.

Critics Consensus: Mississippi Burning draws on real-life tragedy to impart a worthy message with the measured control of an intelligent drama and the hard-hitting impact of a thriller.

Critic Consensus: Mississippi Burning draws on real-life tragedy to impart a worthy message with the measured control of an intelligent drama and the hard-hitting impact of a thriller.

Mississippi Burning is an all-names-changed dramatization of the Ku Klux Klan's murders of three civil rights workers in 1964. Investigating the mysterious disappearances of the three activists are FBI agents Gene Hackman (older, wiser) and Willem Dafoe (younger, idealistic). A Southerner himself, Hackman charms and cajoles his way through the tight-lipped residents of a dusty Mississippi town while Dafoe acts upon the evidence gleaned by his partner. Hackman solves the case by exerting his influence upon beauty-parlor worker Frances McDormand, who wishes to exact revenge for the beatings inflicted upon her by her Klan-connected husband Brad Dourif. Many critics took the film to task for its implication that the Civil Rights movement might never have gained momentum without its white participants; nor were the critics happy that the FBI was shown to utilize tactics as brutal as the Klan's. The title Mississippi Burning is certainly appropriate: nearly half the film is taken up with scenes of smoke and flame.

John Brook
as Reporter
View All

Unfortunately, the central narrative premise of Mississippi Burning sets up the FBI as the sole heroic defender of the victims of southern racism in 1964, which is more than a little disgusting.

Parker pushes the picture along at a fervent clip, with the character scenes back-to-back with chases or violence.

For once, Parker directs without depending on flashy visual tropes.

"Mississippi Burning" surveys the geography of racism, sheds light on the dark night of the soul.

"Mississippi Burning" speeds down the complicated, painful path of civil rights in search of a good thriller.

"Mississippi Burning" feels like a movie made from the inside out, a movie that knows the ways and people of its small Southern city so intimately that, having seen it, I know the place I'd go for a cup of coffee and the place I'd steer clear from.

Parker has loudly claimed the right to fictionalise his subject matter, but he must not then use these fictions as evidence with which to hector us on the realities of law enforcement.

It's memorable for its leads' remarkable performances, and it's worth revisiting because it shines a light on a period of American history that has begun to fade a bit

An electrifying watch, with Hackman delivering what might be his greatest performance.

Slick, well-acted thriller that nonetheless distorts the facts and looks at the civil rights movement from a strictly white perspective

When three civil rights activists go missing in a small Mississippi town, FBI agents Gene Hackman and Willem Dafoe arrive to investigate igniting a powder keg of racial tension. Alan Parker's grim indictment of institutional racism is one gut wrenchingly powerful scene after another. Not only a gripping detective story, it also documents the appalling conditions African Americans had to endure in the not-so distant past. The pairing of college educated agent Dafoe who naively thought he could bluster into this insular community and instantly set the world to rights and Hackman's powerhouse performance as an ex-good ol' boy from the deep south himself works brilliantly; particularly the friction caused by Dafoe mistaking Hackman's laid back seen-it-all-before attitude for indifference. Frances McDormand also puts in a performance of quiet dignity as one of the good people of the community forced to keep silent by fear of the deep-seated hatred that surrounds her. Horrifyingly, this story was based on actual events and is for me, one of the best thrillers ever made. It's nice to think that with Obama in the Whitehouse, we are living in a different world. But as they say "You're in Mississippi now, boy. The rest of America don't mean shit."

There are many movies that do not stand the test of time, but this isn't one of them. Great direction, story, and acting. A moving must see depiction of the state of affairs in the United States in the 1960's. A time of change.This is filmmaking at it's best. Appalling to me, however, that the culprits received such little jail time at the end (and had to be convicted of lesser crimes JUST to convict them of something).

Mississippi Burning is a movie with it's heart in the right place. Parker & company do their very best to immerse the viewer into a time and place unimaginable by many Americans of a younger generations. For the most part they pull it off. This is aided by great performances from Hackman who plays a shrewd detective that has been around the block a few times & a young Dafoe, an ideologue who cannot comprehend how this sort of madness has come to pass. The film at times feels like a horror film, which I found fitting as this was a truly terrifying time for Southern blacks. Trevor Jonesâ(TM) mesmerizing score is outstanding. It feels like it is oozing out of the speakers & saturating your bones. This in conjunction with the filmâ(TM)s dark & gritty look leaves the viewer with an overall unsettling feeling. My main problem with the film unfortunately has to do with the script. While entertaining, I couldn't help but feel a bit confused by the "love" story that was awkwardly forced in. Also, while there is a satisfaction that comes with watching a little revenge porn, having the detectives stoop to such low levels in order to bring the criminals to justice felt a bit wrong. I understand the old adage that one must âfight fire with fire.â� However, this type of racial subjugation was sustained due to the use of macabre terror tactics. The film seems to suggest that the only way to end evil is to partake in it. It doesnâ(TM)t explore the consequences of this course of action and everything seems to fall into place after the detectives embrace these brutal tactics. A message a found a bit disconcerting. Overall, Mississippi Burning is an entertaining, albeit one-dimensional, look at the ruthlessness of the Southern Civil Rights Movement.

This film was released right after I turned 8, and I remember always being curious to see it because I found the title, "Mississippi Burning," cool and interesting....even though I had no idea what it was about. Besides, I live right beside Mississippi. Finally saw it last night, and I have to say it was wellllllllll worth the wait! I found the film to be mega captivating from start to finish, and just all around great....I even liked the music track they play over and over throughout the movie when an uncertain sequence arises. I've seen a few Gene Hackman films and have always liked his stuff, but this may be his very best that I've seen so far. Can't say I've seen many, but this is also the best movie dealing with slavery that I've seen. It holds nothing back and I respect that in a movie. It also truly makes you wonder, with America being "the land of the free," how did lady liberty ever let things like this go on?? "Mississippi Burning" had that kind of power over me, along with the excellent cast. Now, what has four I's and can't see?