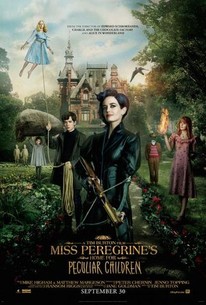 Critics Consensus: Miss Peregrine's Home for Peculiar Children proves a suitable match for Tim Burton's distinctive style, even if it's on stronger footing as a visual experience than a narrative one.

Critics Consensus: Miss Peregrine's Home for Peculiar Children proves a suitable match for Tim Burton's distinctive style, even if it's on stronger footing as a visual experience than a narrative one.

Critic Consensus: Miss Peregrine's Home for Peculiar Children proves a suitable match for Tim Burton's distinctive style, even if it's on stronger footing as a visual experience than a narrative one.

From visionary director Tim Burton, and based upon the best-selling novel, comes an unforgettable motion picture experience. When Jake discovers clues to a mystery that spans different worlds and times, he finds a magical place known as Miss Peregrine's Home for Peculiar Children. But the mystery and danger deepen as he gets to know the residents and learns about their special powers...and their powerful enemies. Ultimately, Jake discovers that only his own special "peculiarity" can save his new friends.

The tone is mass-market whimsy, with a hodgepodge of influences.

The young peculiars have names, but they don't get much by way of backstory or personality. Despite the movie's insistence that they are special, Miss Peregrine ultimately reduces them to the very thing the world rejected them for: their peculiarities.

Some movies are great. Some movies become great over time. And some movies contain moments of such greatness that you forget the rubbish bits. Miss Peregrine's Home for Peculiar Children is one such movie.

Miss Peregrine's Home For Peculiar Children isn't his masterpiece but it will give audiences exactly what they expect from a Burton movie.

The film feels overstuffed, with Tim Burton repeating tricks from his greatest hits (think Beetlejuice and Edward Scissorhands). But stick with it just for those times when Burton flies high on his own peculiar genius.

Tim Burton is on macabre message in his latest offering - "Miss Peregrine's Home for Peculiar Children" - an adaptation of Ransom Riggs' popular trilogy.

Miss Peregrine's Home for Peculiar Children is a perfect pre-Halloween adventure, a primer for scarier stuff to come, and I am genuinely pleased that Tim Burton has found a story that allows him to be subversive within a tale meant for children.

Overall this movie is a little above average fair that moves around fast enough to not have you really think about the plot holes and why characters actually do what they are doing.

[A] a gloriously goth, visually imaginative, and engaging film yet with a caring, sweet edge.

Burton has found a great home for his peculiar talents, and his fans should welcome it, and Miss Peregrine, with open arms.

Visually sumptuous but dull, this is not the joyously peculiar Burton of Edward Scissorhands or Beetlejuice, but a dialed-down version...

Some parts of the film, especially the look, are typical Tim Burton. What's rather unusual for him is the slow pacing in the first act. The logic behind the time loops is not particularly clear either. It probably helps not to think about all this too much and, more importantly, not have kids watch this, because it's pretty damn creepy many times. The finale is pretty wacky but highly entertaining raising the film from a mediocre to a decent experience.

Peculiar, indeed -- and grotesque. But it's still a good bit of fun if you can stick with the story. Eva Green is fantastic, as always, with good performances from all players. I just wish the children in this story demonstrated some growth at the home beyond their individual peculiarities -- it might have been a better film.

The fable is not perfect by any means. It has a tendency to drag in the 3rd quarter, but I was mostly entertained throughout. Miss Peregrine's simple beginning starts out promisingly, then grows ever more puzzling. It ultimately lacks a coherent narrative. Yet it never fails as a beautifully realized period piece. Tim Burton is known for his fantastical worlds. Miss Peregrine is the expression of the director's dreams. The cinematography is nicely handled by 4-time Oscar nominee Bruno Delbonnel (Harry Potter and the Half-Blood Prince, Inside Llewyn Davis). Set in 1943 with Gothic flourishes, Tim Burton makes good use of on-location shooting, first in the suburbs of Tampa, Florida, then Belgium, England, and Wales. All of that shows in the strong visual aesthetic. Torenhof Castle in Belgium was used as the setting for Miss Peregrine's home and it's stunning. I especially liked the exterior shots with a topiary garden of various animals. The production design utilized the actual rooms inside along with constructed practical sets, as opposed to digital backdrops. These include a parlor, a dining room, a conservatory and a lab where one of the children can resurrect the dead. Speaking of which, there are many delightfully frightening images. Colleen Atwood's costumes exploit this too. The image of two mute twins in white robes and masks to match, still haunt my mind. The chronicle is long and unfocused, but there are still enough moments to charm. Think of it as an exquisite but messy entanglement. fastfilmreviews.com