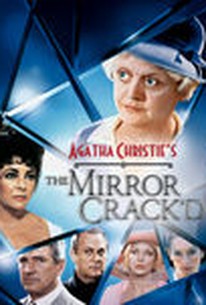 Angela Lansbury takes over the legacy of Margaret Rutherford as Agatha Christie's dogged sleuth Miss Marple in The Mirror Crack'd. The story takes place on a film set in a small British town in the 1950s. Elizabeth Taylor plays a washed-up actress trying to make a comeback but is plagued by a mysterious incident from her past. Unfortunately for her mental state, a collection of murders jar the quiet village where the movie is being made. Miss Marple arrives on the scene with her nephew, Inspector Craddock (Edward Fox), to investigate. In addition to Taylor, an assortment of other movie stars grace the roster of suspects, including Rock Hudson, Kim Novak, and Tony Curtis. ~ Paul Brenner, Rovi

Charles Gray
as Bates the Butler

Eric Dodson
as The Major

Pierce Brosnan
as An actor
View All

Critic Reviews for The Mirror Crack'd

There simply aren't any other films around this Christmas that deliver as much solid entertainment as "The Mirror Crack'd.

The Christie plot ends up so drastically foreshortened that you'd swear a reel must have been misplaced, although the sluggish direction of Guy Hamilton doesn't make one anxious to see it restored.

The good lines make Mirror more fun to watch than it has any right to be.

For all her prolificacy, Agatha Christie relied too often on one particular plot twist, and as soon as you recognize her old favorite here, the film loses all interest.

A nostalgic throwback to the genteel British murder mystery pix of the 1950s.

Though it's obvious after five minutes that this is a complete no-no, the cinema equivalent of a bellyflop, it exercises a perverse fascination

The scriptwriters wanted to replace the weakness of the original story with some sense of humor... But that sense of humor is scant -- just like everything else in the movie. [Full Review in Spanish]

For the more hard-line Christie aficionados, Hamilton's film is likely to be just a little too casual in its adaptation. For the less discriminating, it's a blast.

The Mirror Crack'd is a thoroughly enjoyable Agatha Christie mystery.

Audience Reviews for The Mirror Crack'd

An all-star cast usually indicates a lack of substance in a film -- one that relies on flashiness over story telling. The Mirror Crack'd is no exception. Nevertheless, it is an enjoyable film despite its credulity-stretching reveal and typical confession-without-compelling-evidence resolution. It's a fun lark, but not serious film...and the cat fights should be on every diva-watcher's "must see" list.

As usual with a star studded cast, your focus gets lost, and the story gets boring. Other than that, the mystery is pretty interesting. If you're a fan of these kind of films, watch it, it's pretty good.

A little slow in the start, and a little flabby in the middle, but like most Agatha Christie adaptions, the ending is quite the doozy.

Kim Novak is the standout here with a wonderfully droll performance, but the picture borders on poor taste sticking as closely as it does to the Gene Tierney tragedy.