The Miracle of Morgan's Creek1944 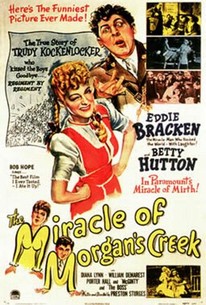 Critics Consensus: The Miracle of Morgan's Creek finds director Preston Sturges at his most zanily subversive -- not to mention hilarious.

Critic Consensus: The Miracle of Morgan's Creek finds director Preston Sturges at his most zanily subversive -- not to mention hilarious.

The Miracle of Morgan's Creek Photos

This wild, once-controversial comedy stars Betty Hutton as Trudy Kockenlocker, a man-crazy single girl whose favorite pastime involves entertaining every visiting GI in town. One morning after a particularly wild night, Trudy labors under the apprehension that last eve, she'd married a soldier named Ratzkywatzky or something. Evidently something had happened that night, for soon Trudy discovers that she's pregnant. She hides this information from her bombastic policeman father (William Demarest), and before long, Trudy's on-again, off-again boyfriend, hapless bank clerk Norval Jones (Eddie Bracken), gets tapped to be the father of the unborn child. He takes the assumed name Ratzkywatzky and poses as a GI (in a World War I uniform!). Unfortunately, this only leads to further complications. Disasters pile up thick and fast, and before long Norval is facing arrest on a variety of charges. Then the miracle of the title occurs. This vintage Preston Sturges farce plays so fast and loose with the censorial restrictions of mid-1940s Hollywood that critic James Agee was moved to comment that, "the Hays office must have been raped in its sleep." As usual, Sturges populates his cast with steadfast members of his stock company-- including, in guest roles, Brian Donlevy and Akim Tamiroff, the stars of his previous film, The Great McGinty. Originally filmed in 1942, Miracle was held from release for an inordinate period of time. The picture was remade (and considerably laundered) as the 1958 Jerry Lewis vehicle Rock-a-bye Baby. ~ Hal Erickson, Rovi

Akim Tamiroff
as The Boss

Porter Hall
as Justice of the Peace

George Melford
as US Marshal

Jimmy Conlin
as The Mayor

Robert Dudley
as Man
View All

News & Interviews for The Miracle of Morgan's Creek

View All The Miracle of Morgan's Creek News

Critic Reviews for The Miracle of Morgan's Creek

Done in the satirical Sturges vein, and directed with that same touch, the story makes much of characterization and somewhat wacky comedy, plus some slapstick, with excellent photography figuring throughout.

Caustic and chaotic in the arch Sturges manner, it's probably his funniest and most smilingly malicious film.

Great verbal gags and non-sequiturs, fast-paced action, and a thorough irreverence for all things deemed respectable -- politicians, policemen and magistrates included -- make it a lasting delight.

Mr. Sturges as author and director, is thoroughly up to his stinging style in this film.

[Writer-director] Preston Sturges has surpassed himself. [Full review in Spanish]

Writer/director Preston Sturges was one of Hollywood's greatest satirists and this blistering comedy is one of his best films.

I suspect that Sturges feels that conscience and comedy are incompatible. It would be hard for a man of talent to make a more self-destructive mistake.

The controversy surrounding it has long since faded away, but the humor is timeless.

One of Sturges' master works, this comedy turns upside down Hollywood's conventions of small-town life with original vision and crackling dialogue.

Audience Reviews for The Miracle of Morgan's Creek

Been waiting to see this for awhile, simply for it's rep. Imagine my surprise when I finally gleaned the subject matter. Betty Hutton is bored to tears by local swain, Eddie Bracken, but excited with the possibility of partying with soldiers who're spending their last night before going to war. And so she uses Bracken to get around her protective dad (William Demerest, who practically steals the show) dumps Bracken at a movie theater triple feature, and then proceeds to party it up with an entire regiment. I fully blame Sturges for this ... sad, sad, morally repellent, degenerative filth.

Wow, this is a crazy, hilarious, remarkable movie, really worth watching. I highly recommend checking it out.

A daring, ahead of its time gem that thinly veils premarital sex and illegitimate pregnancy with a phantom marriage and bust-a-gut humor. A milestone in American comedy and a covert triumph for director Preston Sturges. *Note: Betty Hutton is simply fantastic!

The Miracle of Morgan's Creek Quotes