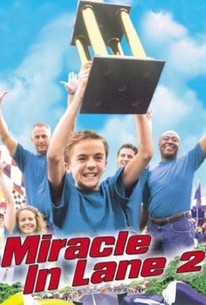 Based on a true story, this made-for-cable drama concerns Justin Yoder (Frankie Muniz), a 12-year-old boy who is confined to a wheelchair. Despite his handicap, Justin is an outgoing kid with a sense of humor and a taste for adventure, and his older brother's accomplishments as an award-winning athlete spark his ambition to find a sport in which he can excel. Justin thinks he has found just such an activity in the local soap-box derby competition, but he finds he has to combat red tape and prejudice before he can compete in the race. Produced for The Disney Channel, Miracle in Lane 2 also stars Patrick Lewis, Roger Aaron Brown, and Molly Hagan.

Tom Virtue
as Announcer
View All

The fact that the film stars Malcolm in the Middle's Frankie Muniz as Justin Yoder not only makes it a must-see for young viewers but also a richly entertaining one for all ages.

Okay, let's get something straight here, right from the beginning, family channel films are never masterpieces, but some of them always manage to have a little more heart than they should. "Miracle in Lane 2" is definitely one of those films. As you watch it, it just feels like you could shrug your shoulders and walk away once it ends, being just another fun movie to sit through, but quite honestly, it is so much more. By the ladder half of the film, you will be tearing up at how much someone could turn from bad to good. This film is all about showing belief, and in the end, it sold me!

The inspirational movies have a reverse effect on me - they make me lose hope for mankind.