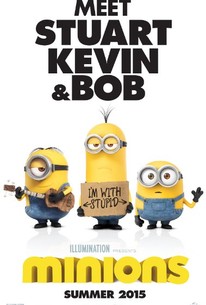 Critics Consensus: The Minions' brightly colored brand of gibberish-fueled insanity stretches to feature length in their self-titled Despicable Me spinoff, with uneven but often hilarious results.

Critics Consensus: The Minions' brightly colored brand of gibberish-fueled insanity stretches to feature length in their self-titled Despicable Me spinoff, with uneven but often hilarious results.

Critic Consensus: The Minions' brightly colored brand of gibberish-fueled insanity stretches to feature length in their self-titled Despicable Me spinoff, with uneven but often hilarious results.

The story of Universal Pictures and Illumination Entertainment's Minions begins at the dawn of time. Starting as single-celled yellow organisms, Minions evolve through the ages, perpetually serving the most despicable of masters. Continuously unsuccessful at keeping these masters-from T. rex to Napoleon-the Minions find themselves without someone to serve and fall into a deep depression. But one Minion named Kevin has a plan, and he-alongside teenage rebel Stuart and lovable little Bob-ventures out into the world to find a new evil boss for his brethren to follow. The trio embarks upon a thrilling journey that ultimately leads them to their next potential master, Scarlet Overkill (Academy Award (R) winner Sandra Bullock), the world's first-ever female super-villain. They travel from frigid Antarctica to 1960s New York City, ending in mod London, where they must face their biggest challenge to date: saving all of Minionkind...from annihilation. (c) Universal

Katy Mixon
as Tina
View All

I got tired of this joke before the movie ended, but I appreciate the gusto with which the filmmakers -- particularly Coffin, with his nimble vocalizations -- carried it out.

With its episodic stream of slapstick gags, Minions has moments of piquant absurdity, but mostly its shrill-but-cutesy anarchy works as a visual sugar rush for the preschool set.

Fittingly, because they're pill-shaped, the Minions work best in small doses.

There's plenty of high-velocity comic inanity on display to keep kids happily diverted. But the movie's major flaw is an extension of its own premise: Search as they may, the minions never find a villain worthy of their subservience.

It's not whether this prequel can mint money; that's a given. The questions is: Can the minions carry a movie all by their mischievous mini-selves? 'Fraid not.

"Minions" is every bit as cute as it's supposed to be, a happily empty-headed animated frolic that rarely pauses to take a breath.

Let's start with what Minions gets right: It's a mercifully short 93 minutes long. But even at that length, it still feels padded.

The plot gets ever more convoluted, the jokes ever more lazy, hinging mostly on country stereotypes. Some of the best gags have zilch to do with either the story or the minions, come out of nowhere and lead to nothing.

Just put on a happy face with Minions!

Considering that this prequel is a full-length feature film about characters incapable of coherent dialogue, it certainly isn't as miserable as the calculated nature of its creation suggested. What a ringing endorsement, right?

Everything about it is a weak excuse to give the Minions something outlandish to do, but there isn't a particularly strong thread running through any of it.

Entertaining, fast-paced and with plenty of funny characters and situations. Kids will have a blast but there isn't as much to salvage for grown-ups here, just a reference here or there. The plot itself is a little too silly for more. The end connects nicely with Despicable Me, though.

On the surface Minions is silly fun, but the narrative highlights a lot of delightful in-jokes that should entice hip viewers. Kids won't get them and frankly many adults won't get either. The floor in Scarlet Overkill's abode resembles the carpet in The Shining. Stuart greets the fire hydrant he fancies with "Papagena" which sounds like nonsense unless you realize it's a character in The Magic Flute. Kevin whistles a tune from Mozart's opera later. Scarlet Overkill's bedtime story about a big bad wolf is underscored by Prokofiev's Peter and the Wolf. But it's not all classical music. Baby boomers should dig the 60s fan service. Minions pop up out of a manhole cover just as the Beatles are crossing the street à la Abbey Road. The minions sing "Revolution", the "Theme from the Monkees", and "Hair". They watch TV while flipping past The Saint, Bewitched & The Dating Game. Alas there instances where toilet humor shows up like an unwelcome house guest. In those brief moments, taste takes a regrettable detour. However, more often than not, Minions is a feast for savvy pop culture aesthetes and their children as well. fastfilmreviews.com

Perhaps I have to see 'Despicable Me', but as my introduction to minions, I didn't think much of this movie. I found I just didn't care much what happens to minions.