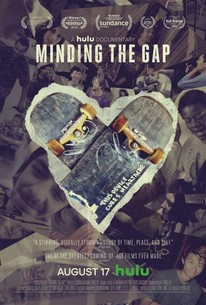 Critics Consensus: Minding the Gap draws on more than a decade of documentary footage to assemble a poignant picture of young American lives that resonates far beyond its onscreen subjects.

Critics Consensus: Minding the Gap draws on more than a decade of documentary footage to assemble a poignant picture of young American lives that resonates far beyond its onscreen subjects.

Critic Consensus: Minding the Gap draws on more than a decade of documentary footage to assemble a poignant picture of young American lives that resonates far beyond its onscreen subjects.

Compiling over 12 years of footage shot in his hometown of Rockford, IL, in MINDING THE GAP, Bing Liu searches for correlations between his skateboarder friends' turbulent upbringings and the complexities of modern-day masculinity. As the film unfolds, Bing captures 23-year-old Zack's tumultuous relationship with his girlfriend deteriorate after the birth of their son and 17-year-old Keire struggling with his racial identity as he faces new responsibilities following the death of his father. While navigating a difficult relationship between his camera, his friends, and his own past, Bing ultimately weaves a story of generational forgiveness while exploring the precarious gap between childhood and adulthood.

News & Interviews for Minding the Gap

View All Minding the Gap News

Critic Reviews for Minding the Gap

Though it runs just 93 minutes, this cinema-verite documentary by Bing Liu manages to feel like an epic.

It will warm your heart but possibly break it a little too.

This is a movie about what people are prepared to swallow when they're thirsty for love.

It is impossibly gripping, terribly personal, but always compassionate.

It's as if all its director Bing Liu had to do was put the idea for his film at the top of a steep hill, give it a prod, then keep filming as natural forces took care of the rest.

Each boy is likeable, troubled, searching, and hypnotically watchable in the way he puts his features on record, dimly conscious that his feelings are playing those features like a needle on a disc.

Minding the Gap might be the finest documentary experience I've had all year, and you should absolutely make a point of seeking it out.

Heart-breaking glimpses of... lives in a film that uses a passion for skateboarding to expose the connections between poverty, race, sex and class in Trump's America.

A kaleidoscope of themes that, althoughat times is ambitious, is a beautiful draw. [Full review in Spanish]

[Bing] Liu is one very sensitive and talented filmmaker who learned from the ground up. In addition, he happens to be a helluva skateboarder.

Poignancy derived from the passage of time plays a similar, if less stark, role in Minding the Gap as it does in "The Up Series" and some of Richard Linklater's work.

Audience Reviews for Minding the Gap

Apart from a forced attempt at sentimentality in the end and the fact that the editing feels mostly random with not much sense of structure, I appreciate how close to Liu's heart his film is and how it shows that skateboarding can be a means for some people to get away from domestic abuse.

Bing Liu weaves together themes of masculine and societal expectations through his friends Keire and Zack. Such layers are bridges through the trioï¿ 1/2(TM)s skateboarding bond that has always been a point of escapism whether it be from each of their damaged upbringings or the trappings of adulthood they find themselves encountering and dealing (or not dealing) with. Some terrific editing and a few choice cuts specifically hammer home the clarity it seems Liu intended to chase.