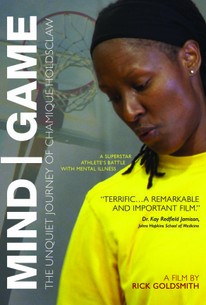 From the rough-edged courts of New York City and recruited by Coach Pat Summitt for the University of Tennessee's Lady Vols, Chamique Holdsclaw was hailed as the "female Michael Jordan," impressing crowds with her artistry, athleticism and drive. A 3-time NCAA champ and Number One draft pick in the WNBA, Holdsclaw seemed destined for a spectacular professional career-until her long-suppressed battle with mental disorders emerged to derail her career and threaten her life. Mind/Game intimately chronicles Holdsclaw's athletic accomplishments and personal setbacks, and her decision, despite public stigma, to become an outspoken mental health advocate. Still, she would face dramatic, unexpected challenges to her own recovery. The film, narrated by Glenn Close, tells a powerful story of courage, struggle, and redemption.

Critic Reviews for Mind/Game: The Unquiet Journey of Chamique Holdsclaw

There are no critic reviews yet for Mind/Game: The Unquiet Journey of Chamique Holdsclaw. Keep checking Rotten Tomatoes for updates!

There are no featured reviews for Mind/Game: The Unquiet Journey of Chamique Holdsclaw at this time.