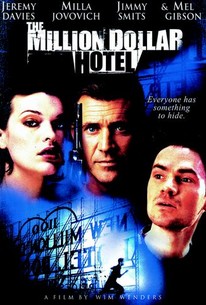 Critics Consensus: Critics say the weirdness of The Million Dollar Hotel is more grating and pretentious than interesting. Also, it takes too long to get to the conclusion.

Critics Consensus: Critics say the weirdness of The Million Dollar Hotel is more grating and pretentious than interesting. Also, it takes too long to get to the conclusion.

Critic Consensus: Critics say the weirdness of The Million Dollar Hotel is more grating and pretentious than interesting. Also, it takes too long to get to the conclusion.

Set in 2001, a group of misfits live in a flea-bitten, skid-row hotel known as 'The Million Dollar Hotel'. Its residents become the center of attention when a junky named Izzy is found murdered. As it turns out, he is the son of a wealthy and powerful media magnate. The residents of the hotel soon become the prime suspects. A badgering detective is then on the case to try and solve the murder. Or was it a suicide?

David Stifel
as Screamer for Jesus

Bono
as Man in Hotel Lobby (uncredited)
View All

Wenders is one of those previously coherent cult directors who's reached the point at which he thinks he's accomplishing something by horsing around with his friends.

It is probably asking too much of this phantasmagoria that it make sense.

If you're looking for a defining Wenders image, try starting with the gloomy angels in overcoats in Wings Of Desire.

An exercise in whimsy.

If any of these characters were half as resonant as Wenders appears to think they are, the film might have seemed charming instead of merely stranded.

Audiences partial to this rather rarefied material will find plenty to enjoy in the technically polished production, but those not on Wenders' wavelength will be seriously alienated.

Self-indulgent and boring; mature teens only.

A delicate, immensely moving elegy about jewels in the trash, love amidst suffering, fraternity in poverty.

An absurd comedy set in an LA flophouse...

The kind of kitchen sink included disaster that Wenders has demonstrated he will make more often than not.

It plays like a sop thrown down by a genius who imagines his every pensée is both precious and engagingly satirical.

Not many people I have spoken to have seen this film but as a Jeremy Davies fan (whom I discovered a love for first in his portrayal of Charles Manson in Helter Skelter and then by accident as Topper in the darkly deviant black comedy Ravenous) I would have to say that it is one of the most haunting and heartbreaking movies I have ever seen. Although Mel Gibson's presence seems a little odd, as you keep expecting him to pull out a gun and start shooting (as he does on one occasion) I felt his portrayal as a physically deformed polic officer investigating the suicide of a man in the hotel believable. With a perfect narrative from Davies and a strong, all be it odd, cast of characters behind him, this movie is one of my favorites and is one I am happy not many people have seen.

The film version of a literary style known as Magical Realism It's a screwball tragedy, a term made up by someone else to describe this film. There are no others of this type. It's a love story without "They lived happily ever after"; it's a mystery (the essence of real) in a subtly surreal world. Not only is the story unique, but so are most of the characters, which seems to be a problem for some viewers. I don't want to paint this movie as too weird, but its differences are some of the best things about it. Cinematography is classic, sharp, lots of deep focus. Exteriors, interiors, non-traditional lighting, a dawn scene shot before the magic hour, it all looks great. I can't recall a scene with foreground in focus while background is out, or vice versa. U2 contributed a tune or two to the soundtrack, as they have for all Wim Wenders films since the 80s. The rest of the soundtrack is jazzy. It supports the film beautifully, and is available on CD. If you've liked any of Wim Wenders films, I think you'll love this one.

Very off beat. It was fun, and even though I hate Jeremy Davies, the rest of the cast checked out.

I can't think of very much to say about this film. The cast list reads like a who's-who of irritating actors: Amanda Plummer, Julian Sands, Bud Cort, etc. Mel Gibson looks very uncomfortable as a G-man investigating a suspicious death, and not just because he's wearing a neck brace and is supposed to have had spinal surgery. Jeremy Davies plays twitchy and annoying very well, but who wants to watch that? Wim Wenders creates some magical visuals but the central murder-mystery, which ought to drive the film, is completely underwhelming.