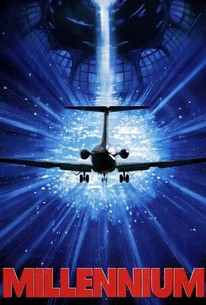 Where has director Michael Anderson been since Logan's Run? Earning his keep on such slick TV-style time-fillers as Millennium. Kris Kristofferson plays the head of an official committee investigating the head-on collision of two commercial jets. A thorough analysis reveals the presence of a weapon of unknown origin in the wreckage; it is also pointed out that some of the victims' watches are running backwards. This, coupled with the cryptic warnings by flight attendant Cheryl Ladd to drop the investigation, prompts Kristofferson to burrow further and uncover the truth: Ladd is a sentinel from 1000 years in the future, who has come back to the 20th Century to help repopulate her dying civilization. Plot pegs and obstacles are in the hands of such sideline characters as enigmatic professor Daniel Travanti and amiable android Robert Joy. Millennium was adapted by John Varley from his own story Air Raid.

Majda Rogerson
as Board Member

Maida Rogerson
as Board Member

David Bolt
as 1st Board Member

Millennium plays out much like someone trying to drunkenly explain the plot of a Doctor Who episode they haven't seen in several years.

Somewhat interesting concepts of time travel. Kris Kristofferson is a bit flat, but Cheryl Ladd brings spark to the scenes.