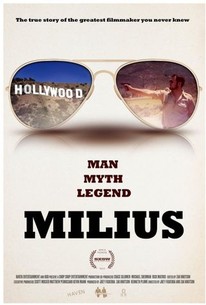 Here is the life story of one of the most influential and controversial film directors in the history of Hollywood, John Milius. From his childhood aspirations to join the military to his formative years at the USC Film School, his legendary work on films such as Apocalypse Now, Jaws, Conan The Barbar-ian, Dirty Harry and Red Dawn, to his ultimate dismissal from Hollywood due to his radical beliefs and controversial behavior.

Thankfully, Milius is not just a hagiographic portrait of the artist as a crotchety, marginalized dynamo.

His friends and fans - clearly upset by his recent stroke - eulogise him to death.

Before he became a caricature, Milius personified 70s Hollywood's renegade heart and was airlifted in to supply gonzo energy at key junctures.

There's not much we learn about bearded monomaniac John Milius that you couldn't glean from a quick internet trawl.

With contributions from Coppola, Spielberg and Scorsese, the film does approach Milius with a certain reverence, but it can't disguise the fact that he's a troubling figure.

Interesting and at times revealing, Milius is ultimately a celebration when it could have been an insightful critique.

Chris Davies
One Room With A View

What emerges is the story of an unstoppable storyteller.

A biography of iconic filmmaker John Milius, this engaging documentary features some of the biggest stars of all time talking about their friend who changed the movies forever.

The whole thing reeks of cigars, machismo and hubris, its rhythm a relentless percussion of hairy chest pumping and big fat back slapping.

While there's a lot of love in the air, the filmmakers don't shirk from addressing his more objectionable side - hard line right-wing politics and a love of guns that, he believes, stalled his studio career.

An engrossing film that will encourage viewers to revisit many of the movies on which he left his mark.

Sam Elliott: He doesn't write for pussies and he doesn't write for women. He writes for men, because he's a man. "Man. Myth. Legend." Milius is a very engaging and well made documentary. John Milius is a filmmaker that I didn't know a whole lot about going into this film. I knew he directed Red Dawn and that he wrote Apocalypse Now, but as far as the details this film gets into; I wasn't really aware. Milius is shown in a very respectable way. The film is obviously more positive then negative about the man, but there are instances where, even his friends, will criticize him for the way he would act and some of the decisions he would make. I happen to love these documentaries that dive into the lives of filmmakers, so my liking of Milius didn't come as much of a surprise for me. Milius is a film I suggest to people who like getting into the behind the scenes workings of filmmaking and who like biographical documentaries of interesting people in general. You don't necessarily have to be a fan of Milius to get a good amount of enjoyment out of the film.