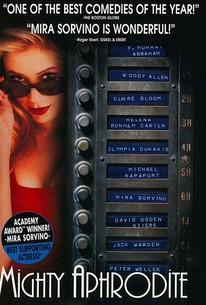 Critics Consensus: Mighty Aphrodite may not stand with Woody Allen's finest work, but it's brought to vivid life by a thoroughly winsome performance from Mira Sorvino.

Critics Consensus: Mighty Aphrodite may not stand with Woody Allen's finest work, but it's brought to vivid life by a thoroughly winsome performance from Mira Sorvino.

Critic Consensus: Mighty Aphrodite may not stand with Woody Allen's finest work, but it's brought to vivid life by a thoroughly winsome performance from Mira Sorvino.

A dissatisfied Manhattan sportswriter finds more than he expected when he searches for the biological mother of his adopted child in Woody Allen's comedy. Writer-director Allen also plays Lenny, a slightly more relaxed incarnation of his usual neurotic screen persona. Lenny is trapped in a bad marriage to high-strung art dealer Amanda (Helena Bonham Carter), but he finds solace in his relationship with his adopted young son. Indeed, he grows so fond of the boy that he decides to track down the boy's real mother, expecting to discover a brilliant professional. Instead, he finds Linda (Mira Sorvino), a ditzy prostitute and porno star who mingles casual vulgarity with disarming innocence. Despite his initial disillusionment, Lenny soon develops a fondness for Linda and decides to play matchmaker, setting her up with a handsome young boxer (Michael Rapaport) who is equally good-hearted and scatterbrained. While the contrast between the free-spirited Linda and the uptight Lenny provides the bulk of the laughs, hints of Allen's more literary humor are also present, particularly in the scenes involving a roaming Greek chorus commenting upon Lenny's fate. Sorvino received a supporting Oscar for her title role in a well-received movie that is nevertheless not at the level of Allen's best-known classics.

Dan Moran
as Ricky, the Pimp

Were Mira Sorvino's all-redeeming, possibly best- list-bound performance to melt away, it would immediately be obvious how malnourished this amiably minor effort is.

That Allen would venture into this subject matter seems fraught with risk. But Mighty Aphrodite quickly turns into safer waters and develops into a sunny comedy about tawdry people.

A minor comedy in Allen's work, though Mia Sorvino, who won an Oscar, shines as the prostitute, despite the director's condescending

Same ol' Woody, though not as effective as some of his past work.

Good, but not great Woody Allen.

One of Woody Allen's best.

Better than average woody Allen movie. Like Mira Sorvino in this one. Didn't like the Greek chanters. Made no sense at all and no point them being there.

"Of all human weaknesses, obsession is the most dangerous, and the silliest!" When he discovers his adopted son is a genius, a New York sportswriter seeks out the boy's birth mother: a prostitute.

REVIEW
A cute, solid Woody Allen comedy that's not as good as many of the comedies that came before but is worlds better than many that came after. Allen plays a sports writer who goes searching for the mother of his adopted son, only to find that she's a prostitute. Played by Mira Sorvino, this character is one of Allen's most delightful creations, a Judy Holliday with a foul mouth. In fact, this is one of Allen's raunchier movies, but it's also one of his sweetest. Sorvino walks a tightrope between dingy and heartbreaking that deservedly won her an Oscar. Allen uses a Greek chorus to comment on the action throughout the film, populated with famous actors like Olympia Dukakis, F. Murray Abraham and Jack Warden.

Odd, like all of Woody's films. It was alright and kind of funny though.

I think I enjoyed this a little more than I should have: it kind of skirts the heavier issues and makes the central plot point - tracking down your adopted child's birth mother - awfully light, and it's a little on the corny side in places... Mira Sorvino, for example, is over the top, and Michael Rappaport is... well, Michael Rappaport. Nevertheless, the ironically used Greek chorus and the framing of the main characters' quest in terms of the Oedipus plot should go down as one of Allen's cleverest devices, and though Woody Allen was basically playing himself (as he always does), he yet again inserted himself into a story crazy enough for his "character" (persona, more precisely?) to be believable.