Midnight Movies: From the Margin to the Mainstream (2005) 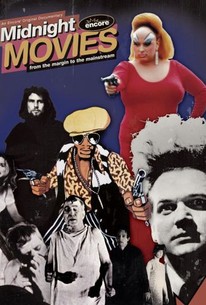 "Midnight Movies: From the Margin to the Mainstream" focuses on six movies that re-invented the film medium while pushing the boundaries of bad taste and social taboos. They are: "El Topo" (1970), "Night of the Living Dead" (1968), "The Harder They Come" (1973), "Pink Flamingos" (1972), "The Rocky Horror Picture Show" (1975), and "Eraserhead" (1977). The documentary includes in-depth interviews with the directors, producers, writers and actors who were part of these low-budget, yet monumental productions, the exhibitors and distributors who played them, and the audiences who viewed them. These filmmakers shared a common desire to upset the traditional aspects of making films--taking filmmaking beyond the norm by making films for ritual viewing, not box office success."

Critic Reviews for Midnight Movies: From the Margin to the Mainstream

Samuels' own enjoyment for midnighters comes through in his funky visual design -- visually spunky for a clips-and-talking-heads film -- and in the energetic editing.

It's a celebration of cinema-going as a 'ritual experience or trip', a communal adventure with no real equivalent in the exquisitely atomised YouTubeverse.

A documentary about challenging and outrageous films should offer something more provocative than counter-culture filmmakers congratulating themselves on a job well done.

In this affectionate glimpse into those countercultural times, filmmaker Stuart Samuels has compiled an engaging distillation of those nocturnal filmic emissions.

For any movie nut who craves their exhibition history, this is a must see documentary.

To the film's credit he does manage to get the major participants together, with each film having a representative key creative person talking about the project.

Audience Reviews for Midnight Movies: From the Margin to the Mainstream

It's really informative, and you can tell there's a high appreciation for these films behind the camera. It's great to see some of the movies I think are among the all time greats getting some attention.

a fun doc about the birth of cult film in the 70's. focusing on 6 influential 'midnight' movies including 2 of my all time faves, night of the living dead and rocky horror, it shows how the phenomenon changed film and helped bring about our ironic post-modern culture. makes u wish you'd been there at the start *sniff* i've yet to see the infamous pink flamingos and jodorowsky's mystical 'eastern,' el topo, but i'm sure i will just to say i did lol

I saw this many months back and remember liking it. It offered great insight into a period of moviemaking that we'll never see the likes of again. It made me happy and sad all at the same time.

Midnight Movies: From the Margin to the Mainstream Quotes