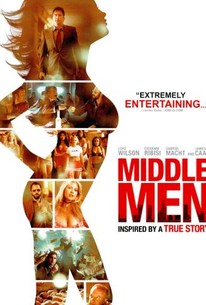 Critics Consensus: Middle Men benefits from a solid cast, particularly Luke Wilson, but its muddled script lets them down.

Critics Consensus: Middle Men benefits from a solid cast, particularly Luke Wilson, but its muddled script lets them down.

Critic Consensus: Middle Men benefits from a solid cast, particularly Luke Wilson, but its muddled script lets them down.

Jesse Jane
as Herself

Is Jack, who is patterned on a real-life character, sociopathic or just plain clueless? Gallo doesn't seem to care. He cares about parading before us lowlifes living the high life.

I never got the feeling Gallo and company figured out how to compress and focus their stories.

Mr. Gallo, for his part, is content to decorate a fairly conventional, intermittently entertaining crime chronicle with a bit of skin and a soupçon of pop sociology. There must be other ways to learn about pornography on the Internet.

Kind of a mess.

This very well-acted, often amusing and dirty-minded hard-R film still stands out in a sea of market-driven blandness.

Middle Men is an anxious film, but not in a good way, in that it doesn't generate suspense so much as dread.

If you're not turned off by a standard-issue subplot about the Valley of temptation, then click ENTER to watch some hot and witty business thriller action.

But the glib, gimmicky narration (i.e., the aforementioned "a better way for guys to jack off"-yawn), delivered in Wilson's vegetative monotone, leaves the film lumpy and uneven and often dull.

Inspired by the reputed experiences of the film's producer, Middle Men casts its protagonist in a suspiciously flattering light... Fortunately Wilson brings enough dark and disreputable shades to the character for the film to work.

Save yourself the trouble of watching it and just check out Goodfellas instead.

...a film that can't make up its mind what it wants to be: a comedy, a melodrama, a crime thriller, or a documentary.

Money. Sex. Murder. Greed. Corruption. A good movie based on a true story. The movie plot is quite interesting and the director picked some good decent actors to play the parts. Ribisi and Wilson were great. Ending was excellent! In 1995, everyone had a VCR, music was sold in record stores, and the world-wide-web was a new found discovery. Businessman Jack Harris (Luke Wilson) had the perfect life a beautiful family and a successful career fixing problem companies. Then he met Wayne Beering (Giovanni Ribisi) and Buck Dolby (Gabriel Macht), two genius but troubled men, who had invented the way adult entertainment is sold over the internet. When Jack agrees to help steer their business, he soon finds himself caught between a 23 year-old porn star and the FBI all the while becoming one of the wealthiest entrepreneurs of his time. Witness a story so outrageous, you won't believe it's true. A story that proves business is a lot like sex getting in is easy, pulling out is hard.

Cast: Luke Wilson, Giovanni Ribisi, Gabriel Macht, James Caan, Jacinda Barrett, Kevin Pollak, Laura Ramsey, Rade Serbedzija, Terry Crews, Kelsey Grammer Director: George Gallo Summary: After spotting a big financial opportunity in the future of Internet pornography, straightlaced entrepreneur Jack Harris (Luke Wilson) enlists his pals Buck (Gabriel Macht) and Wayne (Giovanni Ribisi) to help him develop an online billing company specializing in adult entertainment. But as the firm takes off, Jack finds some unexpected kinks in the business of kink -- including mobsters, the FBI, con men and terrorists. My Thoughts: "This is one of those films I went into without knowing nothing about it, just that it had a couple of my fav. actor's in it, that being Giovanni Ribisi and Luke Wilson. If they were not in this film and I had known what the film was about, I would have passed on it. I really could care less how porn came to be on the internet. But in the end it was a pretty good business flick. I was surprised at how well written and directed it was. Great performances from Luke and Giovanni. Like most great independent flicks, this one too got an unfortunate small screening. Which is a shame since so much crap gets shown in so many more theaters then independent films do. Great movie with comedy, drama, and I believe is a bit of a true story. Definitely recommended."