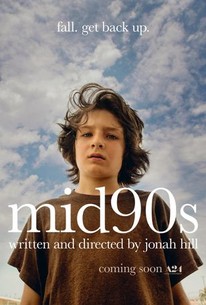 Critics Consensus: Mid90s tells a clear-eyed yet nostalgic coming-of-age tale that might mark the start of an auspicious new career for debuting writer-director Jonah Hill.

Critics Consensus: Mid90s tells a clear-eyed yet nostalgic coming-of-age tale that might mark the start of an auspicious new career for debuting writer-director Jonah Hill.

Critic Consensus: Mid90s tells a clear-eyed yet nostalgic coming-of-age tale that might mark the start of an auspicious new career for debuting writer-director Jonah Hill.

Mid90s follows Stevie, a thirteen-year-old in 90s-era LA who spends his summer navigating between his troubled home life and a group of new friends that he meets at a Motor Avenue skate shop.

Lending the film considerable ballast is an affecting performance by Sunny Suljic.

Mid90s is alive to the debauchery and obnoxiousness of teenagers, but also to their warmth and loyalty.

Hill has come up with an accomplished and watchable film in this style, nearly a pastiche...

Mid90s cares less about making you laugh than enveloping you in the moment, even when the moments consist of nothing more than killed time - daft small talk, the lazy throb of hip hop, the therapeutic purr and slap of skateboard wheels on concrete.

The dramatic third act is a tad Hollywood, but this is a lot of fun.

It's honest, emotional without ever being cheesy, and moving. Jonah Hill delivers an electrifying debut.

At under an hour and a half this feels like partial story that could become a more fully developed piece when Jonah Hill is more confident as a director.

A contradictory mood that is expertly conveyed through a visually harsh staging. [Full Review in Spanish]

An endearing yet powerful portrait of boyhood decadence. Jonah Hill's debut is a strong take on maturity under difficult circumstances. [Full review in Spanish].

Mid90s is one of those debuts that signals the beginning of a great directing career for Jonah Hill. [Full Review in Spanish]

The interesting thing with this movie is that it's up to you to get something out of it. It doesn't really preach any lessons, it just is. Yeah there are some moments where the boys have some very real conversations, but these feel genuine to them. At it's core it's just a blunt and raw look at a people and a time, that being young skaters in the mid-90s, and honestly it kind of nails it. It's not always pleasant, in fact it's often painfully uncomfortable, but that's genuine to the experience. I guess it's a coming of age story, but I'm not even really sure if the character really comes of age by the end. Landmark moments that would have been romanticized in other films are shown unfiltered here. These people existed, and to a degree these people still do exist. It's not always pleasant, but it's raw and kind of beautiful.

This film is like a poor man's Wolf of Wall Street, both in that it is not as great of a film, but also is a smaller scale film about literally poorer characters. Jonah Hill does a good job keeping the feel of film very casual, and the characters, through all of their flaws, end up being likeable. The story feels like it just spins without cause until it comes to stop, but the ride is pretty fun nonetheless.

Jonah Hill's directing debut is a small slice of 90s cinema that's heavy on sense of time and place, light on plot, but filled with youthful authenticity. We follow a young kid (10? 12?) as he ingratiates himself with a group of older teen skaters. He wants to emulate these cool kids and dedicates himself to being a skateboarder. There are some intra-group conflicts and jealousies that play out as our protagonist becomes part of the gang. He gets exposed to smoking, drinking, and girls at house parties. There is one sequence at a party where a teen girl (15? 16?) takes our young hero into a bedroom to deflower him, and I instantly became anxious and needed to know the ages of the characters onscreen (it's never verified). Our main character also happens to be one of the more boring people in the film, almost by design. He's a blank page for the audience to project onto, and he's trying so hard at such a formative age to emulate the older teens that it makes sense to leave him less defined. Hill hired professional skateboarders and taught them acting, and they act like professional skateboarders. In fairness, they act like recognizable teenagers, and Hill's natural ear for dialogue rings true for this time of life. The movie takes a few turns into After School Special territory but doesn't seem to deal with the consequences or resolutions of those dramatic events, which makes the film feel both more realistic and less fulfilling. Our hero takes a lot of injuries, some of them bleeding-head related, but nothing seems to come from them except the growing admiration of his peers. The home life storyline is worrisome and vague. Our protagonist has a physically abusive older brother (Lucas Hedges) who resents him and a single mother (Katherine Waterston) who seems irresponsible in not doing something about her youngest son being gone well into the morning hours. Even our protagonist seems to have penchant for self-harm, something that will presumably lead to problems down the line. In the meantime, mid90s is a pleasant and mostly entertaining, seemingly autobiographical experience. It gets by on enough for a watch. Nate's Grade: B

It's fascinating to see certain actors and actresses try their hand at writing or directing, because you never truly know what to expect from their first outing. This has been a very surprising year in that regard, seeing John Krasinski's masterful work on A Quiet Place and Bradley Cooper's upcoming rendition of A Star is Born. That being said, I truly don't believe an actor/actresses will be able to top Jonah Hill's film Mid90s for quite some time, in terms of going from acting to directing. When a film can come out of nowhere and be hilarious, shocking, heartfelt, and realistic, all at once, then it's an immediate winner in my eyes. Coupled with the numerous things that this movie has going for it on and off the screen, this is the movie of the year in my opinion. Although the year still has quite a few films to go, I have a hard time believing something will impress me more than this film has. Not having the greatest Mother, being bullied by his older brother, and just wanting to fit in, Mid90s focusses on young Stevie (Sunny Suljic) as he strives to stay as far away from his home life as possible. Wishing to fit in with cooler kids than the people he has grown up with, he meets a group of older kids at a skate shop. They grow to enjoy his presence and an unlikely friendship sparks between him and this group, but it's not all sunshine and rainbows. Although he has a blast hanging out with them and cracking jokes, this film explores the harsh realities of being responsible and what drugs and alcohol can really do to someone, especially when you're young. The evolution of most of the characters throughout this film is really something to see, and at a mere 84 minutes, this film is pleasantly well fleshed out. Going into this film, I expected certain things out of Jonah Hill's direction and I was not disappointed. Yes, those who have experienced his roles in movies knows that he can be the most hilarious person in a room, but also deliver dramatic performances that have now given him Oscar nominations, so I went into this movie hoping for him to have placed both of those extremes on-screen. Mid90s is one of the funniest movies I've seen all year, and while the first half of the movie is simply there to amuse audiences, there are many set-ups being made for a darker second half. The evolution of this film is absolutely fantastic from start to finish. The way Hill directs these performers is truly something else, but that's also due to the fact that this is a very well-cast film in general. Sunny Suljic is a real force to be reckoned with. Having this much talent at such a young age is a very rare thing, but he resonated with me completely. The way the friendship between Stevie and Ray forms is absolutely brilliant. Na-kel Smith brings a lot more to the table than what I expected after his first few scenes, but that was clearly intentional. His character is the most mature of the group that Stevie hangs out with, which works in favour of giving life lessons throughout the course of the movie. When looking back on this movie as a whole, from the comedic first act, to the character development throughout the second act, and even to the dramatic moments throughout the third, I found myself in awe that this was directed by a first time director. In the end, I truly hope Mid90s receives the attention that it deserves this year. I can see this movie getting a lot of love from critics and tons of buzz when awards season kicks into high gear. From the very raw and real screenplay to the incredible score by the great Trent Reznor and Atticus Ross, to the overall messages throughout this film, Mid90s is as entertaining and funny as it is dramatic and eye-opening. I loved every second of this film and I can't recommend it enough. This is easily my favourite film of 2018 and one of the most memorable theatre experiences in quite some time. Saying that about an independent film that only lasts for 84 minutes may seem crazy, but I couldn't be more honest about that statement. See this film.