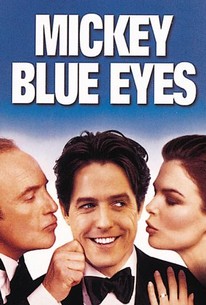 Would you believe Hugh Grant as a violent Mafioso from Kansas City? Don't worry if you can't: that's part of the joke in this romantic comedy. Michael Felgate (Hugh Grant) is a British expatriate living in Manhattan who runs a successful auction house dealing in rare and valuable art. When Michael meets Gina (Jeanne Tripplehorn), he's immediately smitten, and three months later he asks for her hand in marriage. Gina, however, tells Michael that she could never marry him because of her family. Crestfallen, Michael wants to find out what the trouble could be; and when he tracks down Gina's father Frank (James Caan), he discovers the nature of Gina's family problems: Frank is a Mafia kingpin, and several of Gina's previous boyfriends have met an ill fate trying to fit in with his criminal lifestyle. Frank, however, takes an immediate liking to Michael and asks him for a few small favors. Before long, Michael has inadvertently laundered mob money through his auction house and has to pass himself off to rival gangsters as Mickey Blue Eyes, a wiseguy from Kansas City. Mickey Blue Eyes was co-produced by Hugh Grant's significant other, Elizabeth Hurley, and directed by Kelly Makin, whose previous credits include the Kids in the Hall movie Brain Candy.

David B. McConeghey
as Tourist Man

The second half is a mess, full of characters going off in directions we're not prepared for and rogue plot devices that seem either to have been planned for and then forgotten, or added as an afterthought.

Eventually, the movie reaches a point where sheer plot contrivance is the only way out, and a lot of steam is lost when the FBI gets involved and the actual wedding ceremony approaches.

An agreeable if forgettable comedy...

Messy movie. Not much for teens here.

The love story is ill-served by all directly involved.

Gets bogged down in the kind of tangled-web humor that should have died out with Three's Company.

As a moviegoer, I never dreamed I would yearn for Leslie Nielsen.

The film is as insulting as taking the queen to the Olive Garden.

Fish out of water story has one good bit: Grant's attempts at a Lower East Side New York accent. You can skip the rest.

One of my favourite Comedies, which seems to include half the Sopranos cast. This is a real funny take on the Gangster genre, with some hilarious moments. The contrast of the ever so straight and wimpy Hugh Grant right in the middle of a big crime family has some funny implications.

saw bits of it gd from wot i watched

Trailer had the best bits. An Englishman tries to fit into the mob.