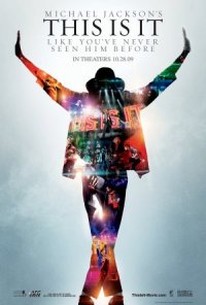 Critics Consensus: While it may not be the definitive concert film (or the insightful backstage look) some will hope for, Michael Jackson's This Is It packs more than enough entertainment value to live up to its ambitious title.

Critics Consensus: While it may not be the definitive concert film (or the insightful backstage look) some will hope for, Michael Jackson's This Is It packs more than enough entertainment value to live up to its ambitious title.

Critic Consensus: While it may not be the definitive concert film (or the insightful backstage look) some will hope for, Michael Jackson's This Is It packs more than enough entertainment value to live up to its ambitious title.

Michael Jackson's This Is It Photos

"Michael Jackson's This Is It" will offer Jackson fans and music lovers worldwide a rare, behind-the-scenes look at the performer as he developed, created and rehearsed for his sold-out concerts that would have taken place beginning this summer in London's O2 Arena. Chronicling the months from March through June, 2009, the film is produced with the full support of the Estate of Michael Jackson and drawn from more than one hundred hours of behind-the-scenes footage, featuring Jackson rehearsing a number of his songs for the show. Audiences will be given a privileged and private look at Jackson as he has never been seen before. In raw and candid detail, "Michael Jackson's This Is It" captures the singer, dancer, filmmaker, architect, creative genius, and great artist at work as he creates and perfects his final show.

News & Interviews for Michael Jackson's This Is It

View All Michael Jackson's This Is It News

Critic Reviews for Michael Jackson's This Is It

A bizarre and opportunist piece of film-making.

The Michael Jackson we see here is not a self-styled Messiah or a tabloid oddity. He is, instead, what he always was underneath it all: a talented musician, a brilliant dancer, and one of the most gifted entertainers of his time.

It's purpose isn't to reinvent Jackson, but to recapture some of the creative magic that made the kid from Indiana a worldwide musical ambassador.

The last song we're shown Jackson singing is "Man in the Mirror"; it's a shame the filmmakers did not take a cue from its lyrics to put together an uncompromising assessment of Jackson, rather than delivering another attempt to perpetuate the myth.

It's an expertly packaged -- brilliantly packaged, considering how quickly the job was done -- phantasmagoria that emphasizes, quite convincingly, the energy that Michael could still draw from whatever was fueling his wraith-thin body.

Michael Jackson's perfectionism fails him in This Is It, and we're all the better for it.

This is a film designed to give fans one last chance to see the Jackson they knew and loved. And on that level, "This Is It" succeeds - showing that Jackson still had it, even in his final moments.

This Is It gives us a fuller portrait of the man and his passion than we've ever seen before. But don't think it lets us finally understand him.

A film that treads way too carefully around the star and the desire to preserve his image as the consummate entertainer.

I think you're going to feel like you paid full price to watch the special features on a Michael Jackson DVD.

It's always inspiring to see a genius at work. And that's exactly how I felt watching Michael Jackson in This Is it--inspired.

Don't watch this documentary film expecting to find insight into Jackson's troubled psyche, or to spot premonitions of his impending death, watch instead for glimpses of his peerless talent.

Audience Reviews for Michael Jackson's This Is It

After Michael Jackson's death i was addicted to knowing more about him and now he's my favorite singer, and when this movie was released in theaters, literally, everyone in my family went to go see it, and it blew all of us away, each and every music rendition Michael did from his hit songs (yet for some reason they didn't have bad, speed demon, will you be there, or black or white.) R.I.P. Michael Jackson we all miss you, your family, my family, everyone misses you, you were a true change to this world

A very well-edited behind-the-scenes clearly made for fans, showing nice rehearsals and backstage footage of Michael Jackson's concert that never was, but let's only hope this is not the ultimate film to be made about him.

This movie made me love Michael Jackson. We lost a truly great artist...This was a great look into what a perfectionist (in a good way) he was and how much effort he put into his work. And if you want to see some more great MIchael, watch his short film/music Video for Ghost. Very very entertaining. :)

Michael Jackson's This Is It Quotes