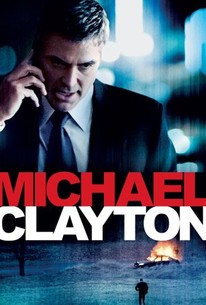 Critics Consensus: Michael Clayton is one of the most sharply scripted films of 2007, with an engrossing premise and faultless acting. Director Tony Gilroy succeeds not only in capturing the audience's attention, but holding it until the credits roll.

Critics Consensus: Michael Clayton is one of the most sharply scripted films of 2007, with an engrossing premise and faultless acting. Director Tony Gilroy succeeds not only in capturing the audience's attention, but holding it until the credits roll.

Critic Consensus: Michael Clayton is one of the most sharply scripted films of 2007, with an engrossing premise and faultless acting. Director Tony Gilroy succeeds not only in capturing the audience's attention, but holding it until the credits roll.

Michael Clayton (George Clooney) handles all of the dirty work for a major New York law firm, arranging top-flight legal services and skirting through loopholes for ethically questionable clients. But when a fellow "fixer" decides to turn on the very firm they were hired to clean up for, Clayton finds himself at the center of a conspiratorial maelstrom. Once an ambitious D.A., Clayton is now a shell of his former dynamic self, thanks to a divorce, an unfortunate business venture, and astronomical debt. Though he longs to leave the cutthroat, ethically dubious world of corporate law behind, Clayton's poor financial situation and devotion to firm head Marty Bach (Sydney Pollack) leave him little choice but to remain on the job and tough it out. Meanwhile, litigator Karen Crowder (Tilda Swinton) finds her entire company's future hinging on the outcome of a multi-billion-dollar settlement overseen by Clayton's friend, star lawyer Arthur Edens (Tom Wilkinson). When Edens snaps and decides to blow the whistle on the questionable case, sabotaging the defense, Clayton must decide between his loyalty and his conscience. ~ Jason Buchanan, Rovi

Alberto Vasquez
as Player No. 1

Brian Koppelman
as Player No. 2

Clooney's glamorous intelligence is deepened by his constant hints that slickness, like corporate integrity, is just an act.

The film doesn't disappoint. It's an enveloping thriller with a cool intelligence, the kind of film Redford or Newman would have jumped at 15 or 20 years ago.

Confident in the story's power and the moviegoers' intelligence, Gilroy uses only one explosion to own our rapt attention.

This doesn't begin to deserve the Oscar nominations it's likely to get, but I had a good time with it nonetheless.

Smart and exciting, Michael Clayton takes the audience on a ride whose pleasures almost sneak up on you and are all the more satisfying because of it.

Michael Clayton is a legal suspense thriller that manages to get our attention from the very moment that the picture appears on the screen.

The deeper you get into "Clayton," the more it becomes apparent that this is a masterful character study of how people react when pushed to the brink.

A deliberately paced, endlessly riveting, highly suspenseful work that captivates and thrills with an assured hand.

The storytelling is so good I simply got caught up, and, as for George, he is seriously, seriously good... Here, his performance is passionate, subtle and right on the money.

[Tony] Gilroy directs with a cool hand and an underplayed sense of drama, letting the words and the performances carry the film.

Though not the most entertaining or innovative film, Michael Clayton is still a compelling, smart, and satisfying thriller that features strong acting and an interesting premise.

Corporate greed's at the middle of this look at the behind the scenes legal wrangling in a wrongful death lawsuit, greed vs. morality. The leads are good (especially Swinton) even if the pace is slow at first, so distracting.

The standard of filmmaking in ''Michael Clayton'' is impeccable. The plot threads tie together wonderfully, the performances from Clooney, Swinton and Wilkinson are outstanding and the tension that runs throughout the film is so high. Gilroy's script is wonderful with such hard-hitting dialogue and the development of each character is incredibly solid. If you're looking for a superbly assembled and suspenseful drama, ''Michael Clayton'' is as perfect as you could get.

Michael Clayton is an ex-ADA who now works as a fixer for a corporate law firm. When his old friend and mentor seemingly has a psychological break while defending another corporate giant he is called in to "handle" the situation. I must admit that this film had me hooked right from the incredibly intense monologue from Tom Wilkinson that opens the film. It plays out like a corporate Cold War film; the fact is that the plot will be very familiar to anyone who has seen a few legal dramas and the conclusion has a definite air of inevitability about it. But it's the journey there that makes it so worthwhile. Wilkinson is superb as the corporate slave who has a life changing catharsis, as is Clooney as the complex and morally ambiguous Clayton and Tilda Swinton as the immoral but anxiety riddled executive. It has no pointless action sequences and no gimmicks or twists; it's simply an very well written, extremely well acted and attractively and intelligently directed film full of interesting characters and excellent dialogue. Even the portrayal of Clayton's homelife, which is usually cinematic poison is realistic and unsentimental. Very much in the tradition of the likes of All The President's Men, Michael Clayton is the best straightforward and unpretentious low-key thriller I've seen in recent years.