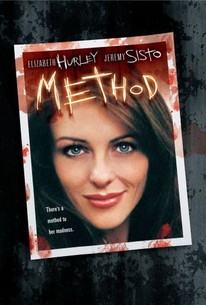 Has a star's desire to fully embrace a sinister role led her into madness? Rebecca Fairbanks (Elizabeth Hurley) is a well-known actress trying to get her career back on track after taking several years off. Fairbanks is returning to the screen in a role she's long wished to play -- Belle Gunness, a notorious real-life mass murderer who went on a well-documented killing spree in the 19th century. As the film's shooting schedule wears on, Fairbanks becomes romantically involved with her leading man, Jake Fields (Jeremy Sisto), but Fields and his friends on the production staff begin to question her stability when she starts wearing her costumes at all times, living on the sets, and tries to live as the character of Guinness. Fairbanks' behavior becomes all the more disturbing when members of the crew start falling victim to a murderer. Coincidentally, The Method (also known simply as Method) was Elizabeth Hurley's first film project after taking a two-year break from her acting career following the birth of her son in the spring of 2002.

There are no critic reviews yet for Method. Keep checking Rotten Tomatoes for updates!

This is known as Dead Even in the UK. A surprisingly good low budget film. Hurley plays the part of a woman who became a serial killer in the 19th century. She tries to get into the role.....but maybe just a bit too much! Pretty good idea for the plot though it does switch back and forth a lot from the past to present.