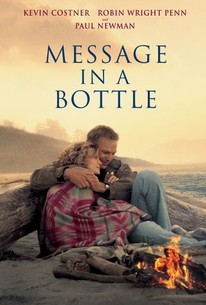 Critics Consensus: Handsome-looking but dramatically inert, Message in a Bottle maroons a formidable cast in a trite romance that lacks spark.

Critics Consensus: Handsome-looking but dramatically inert, Message in a Bottle maroons a formidable cast in a trite romance that lacks spark.

Critic Consensus: Handsome-looking but dramatically inert, Message in a Bottle maroons a formidable cast in a trite romance that lacks spark.

Message in a Bottle Photos

Based on the novel by Nicholas Sparks, Message In A Bottle stars Robin Wright Penn as Theresa Osborne, a writer for the Chicago Tribune. While her son visits her cheating ex-husband, Theresa goes on a vacation by herself. One day, while running on the beach, she finds a bottle washed up on the shore. She opens it and inside finds a love letter unlike any she's ever read. Captivated by the author's words of love, she returns to her job at the Tribune where she convinces her boss to run an article about the mystery writer, known only as "G." He approves, and Theresa begins her hunt. Scrutinizing every physical detail of the letter and the path the bottle may have taken, she eventually locates Garret Blake (Kevin Costner), a North Carolina boat-restorer who has not been the same since the tragic death of his beloved wife Catherine. Since her death, Garret has written several letters to his dead wife, put them in a bottles, and let them loose in the sea. As Theresa spends time with Garret, she quickly falls in love with him, though she neglects to tell him she knows about the letters. Garret, prodded by his cantankerous, no-nonsense dad, Dodge (Paul Newman), emerges from his shell of grief and develops an interest in Theresa as well. Theresa returns to Chicago and Garret soon visits her; he meets her son, Jason (Jesse James), but also discovers her knowledge of the letters. Eventually the two, who have both lost love, must cast off their emotional baggage and decide if they will pursue love even if it can't always last. ~ Ron Wells, Rovi

Steve Mellor
as Man on Dock

Lance A. Gilbert
as Man on Sinking Boat

Critic Reviews for Message in a Bottle

The climactic events are shameless, contrived, and wildly out of tune with the rest of the story. To saddle Costner, Penn and Newman with such goofy melodrama is like hiring Fred Astaire and strapping a tractor on his back.

Costner has a free pass to be as lazy as he can possibly be, and the result is one of the most smugly alienating romantic lead performances that I can quickly call to mind.

If it had just quit while it was ahead....

If only Costner could be cast out to sea like a bottle.

Paul Newman as a cantankerous old man steals this movie with his character's endearing forthrightness.

Tolerate the silly and swoony story and allow yourself to drift away in the gorgeous Caleb Deschanel photography.

Have romantic dramas sunk so low that somebody would actually buy this bilge of goods?

Next to this, the films of 'The Horse Whisperer' and 'The English Patient' could almost be mistaken for entries in the 'Die Hard' series.

Laying it on a bit thick, am I? Don't worry, so does this film.

It should have read, 'Memo to screenwriters: Use you brain!'

Just a Degree or Two Shy of True North

Audience Reviews for Message in a Bottle

You know that movie where a famous doctor/cannibal/serial killer cuts open a victim's skull, cuts away some brain matter w/out killing the guy, fries it up in a hot skillet, and then feeds it again to the victim ("that's good," said the poor schmuck)? Well here at last is the cinematic equivalent to that experience.

Cast: Kevin Costner, Robin Wright Penn, Paul Newman, Robbie Coltrane, John Savage, Illeana Douglas Director: Luis Mandoki Summary: Newspaper researcher Theresa Osborne (Robin Wright Penn) finds a letter in a bottle penned by grieving shipbuilder Garret Blake (Kevin Costner), who writes to ease the pain of his wife's death. But when Osborne tracks Blake down, their growing attraction is endangered by their pasts. Based on Nicholas Sparks's best-selling novel, director Luis Mandoki's romantic drama explores the possibility of love amid heartache. My Thoughts: "Another film based on a Nicholas Sparks book. I'm not familiar with his books. Never read one, but I have seen quite a few of the films based on his novels. I don't know if this is a spoiler or not so you may want to skip this sentence or a few more of them; but is every relationship in his books doomed? Every film I have seen of his, the relationships are going great and then BAM! The love interest is dead. Quite depressing way to write. Build up such a great love story to just end it in despair. The man is obsess with killing off all the 'better halves' of these poor people. Besides that, I thought the film was a good little sappy romance flick. I could have done without all the horrible love songs. The acting was good, and I loved Paul Newman as the no BS father. Kevin Costner redeemed himself in my eyes from the horrible film I recently saw him in. He does much better in these types of roles. Those of you who enjoyed the book, or who like romance films will enjoy this one as well."

I really enjoyed this but in my opinion I liked the book a lot better then the movie.

This movie is too much of a chick flick - and usually I don't mind them.

Message in a Bottle Quotes