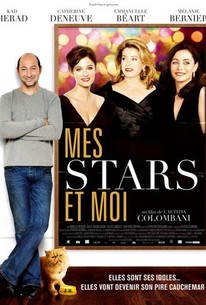 A movie fan finds a way to make himself a presence in the lives of his favorite actresses in this comedy from French writer-director Laetitia Colombani. Robert Lepage (Kad Merad) is a janitor who is part of the cleaning crew at the offices of the biggest talent agency in Paris. Ordinarily, this job wouldn't offer many perks, but Robert is clever enough to know what to look for while he's vacuuming or emptying waste baskets, and he's able to swipe invitations to major events and pencil himself onto guest lists for show-biz soirees. Robert's longtime girlfriend (Maria de Medeiros) doesn't think much of his double life, but he's having enough fun that he starts adding his own thoughts to paperwork at the office, and begins using his skills to boost the careers of his favorite stars -- classy veteran actress Solange Duvivier (Catherine Deneuve), sultry siren Isabelle Serena (Emmanuelle Beart) and promising starlet Violette Duval (Melanie Bernier). Thanks to Robert's meddling, Solange, Isabelle and Violette are cast together in a big-budget costume epic, but when he becomes a regular visitor to the set, the actresses begin wondering among themselves who he is and how he became such a big shot. Mes Stars Et Moi (aka My Stars) received its North American premiere at the 2008 Montreal World Film Festival.

Christophe Rossignon
as The Butler

Arno Chevrier
as The Manager

There are no critic reviews yet for My Stars (Mes stars et moi). Keep checking Rotten Tomatoes for updates!

Amusing & satisfying comedy about an obsessive fan who gets the tables turned on him by 3 actresses who collaborate to end his unwanted attentions while making some pointed comments about fame and fandom. Catherine Deneuve as a living legend with weight issues and Emmanuelle Beart as a box-office star who sleeps around have visible fun trading contentious barbs with each other while playing with their own public images. Good characterizations, some laughs and surprises, and a great closing scene for the future pursuits of the fanatic.