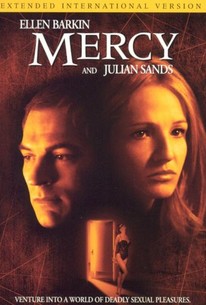 In this adult-themed thriller, Catherine Palmer (Ellen Barkin) is a police detective assigned to search out a serial killer who has been targeting a group of S&M enthusiasts. In order to find the murderer, Catherine must venture into a netherworld of violent sexual gamesmanship, and she soon discovers that once you've gone in, it's difficult to get out again. Mercy also features Julian Sands, Peta Wilson, Wendy Crewson, and Stephen Baldwin.

Gene Mack
as Detective at Mansion

Robert B. Kennedy
as Reynold's Lawyer

No matter the begging and pleading, Mercy should be taken out back and buried. Better yet, blow it up first and then bury it.

I'd be lying if I said I were bored by this film. But it's not exactly the most exciting.

There are no featured audience reviews yet. Click the link below to see what others say about Mercy!