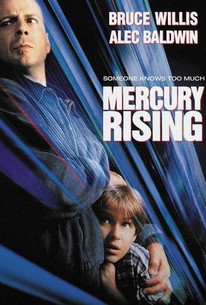 Critics Consensus: Mercury Rising lays the action on thick, but can never find a dramatic pulse to keep viewers -- or Bruce Willis -- engaged with its maudlin story.

Critics Consensus: Mercury Rising lays the action on thick, but can never find a dramatic pulse to keep viewers -- or Bruce Willis -- engaged with its maudlin story.

Critic Consensus: Mercury Rising lays the action on thick, but can never find a dramatic pulse to keep viewers -- or Bruce Willis -- engaged with its maudlin story.

In this action suspense thriller, nine-year-old autistic savant Simon deciphers a government code and calls in for his prize. Worried about national security, NSA officials send an assassin to kill him. His parents are killed but he is saved by an FBI agent who drags him through Chicago to protect him.

Chi McBride
as Tommy B. Jordan

Denise Woods
as Nurse in Elevator

Kim Robillard
as Motorman
View All

There's such a lack of vision behind Mercury Rising that the title could have it going in either direction and it would still end up in the same familiar place.

The actors' serious faces are out of place in this hopelessly silly action conspiracy.

Baldwin's Kudrow is a one-dimensional, humorless variation on his corporate tyrant in Glengarry Glen Ross.

Standard action fare with a false overlay of social conscience.

The mercury may rise but pulses never do.

Offers the viewer a pleasant surprise. [Full review in Spanish]

I must admit I was underwhelmed by Mercury Rising - in fact the temperature actually sank.

This should never have been made. Avoid it and pretend it wasn't.

Fortunately, as directed with muscle and heart by Harold Becker, this tale of an angry die-hard and an orphaned autistic boy caught in a deadly government plot ranks at least as high as John McTiernan's first collaboration with an embattled Willis.

An anaemic time-waster you've seen before that fails to create tension or generate the suspense this genre cries out for.

This is a rather formulaic, and predictable thriller, which is a real shame since the premise had a lot of potential. Bruce Willis stars as an outcast FBI agent whose chance at redemption comes in the form of protecting a 9 year-old autistic boy who managed to crack a high level government code hidden in a puzzle book. The code got cracked, and due to the secrets involved with it, the cracker has to apparently be silenced, and that's where the film fails to live up to some of its potential. The target is a young autistic kid, and I can't really remember anyone challenging the moral question of eliminating the kid given the circumstances. The film sorta toys with the idea of who is more of a villain, but mostly it just relies on being a typical cat and mouse chase thriller. Willis tries his best with the material, but doesn't do anything remarkable. The same can be said for most of the cast, save for Miko Hughes as the autistic kid, who actually does show some chops with having to play a difficult part with some amount of sensitivity and nuance. See this if you want, but don't expect much since, despite the premise, it's a rather forgettable piece of work.

Nobody's trying hard at all in this by-the-numbers Willis vehicle that has him up against a government conspiracy --- ho-hum. To demonstrate evolution: the F.B.I. useta be the bad guys in this sort of thing, but herein Willis plays one, howbeit a "rogue" agent. Oooooo.

did not have a good plot. really bad acting.

Bruce Willis, Alec Baldwin, Chi McBride, Miko Hughes, Kim Dickens DIRECTED BY: Harold Becker Bruce Willis is an outcast FBI agent who is assigned to protect a 9 year old autistic boy who is the target for assassins after cracking a top secret government code Decent thriller. Bruce Willis doing what he does best, playing a cop. The theory of the movie was interesting, but it got a bit boring in some places. Thought Miko Hughes was great for being so young to play such a difficult character. Acting was good by all. The little tender moment at the end was a tear jerker. Worth the rental.