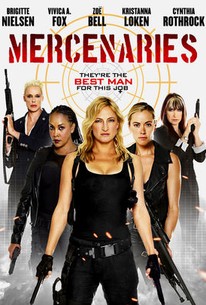 Christopher Douglas-Olen Ray's action film Mercenaries concerns a squadron of fearless female fighters who are tasked with breaking a foreign official out of a well-fortified prison after the woman is taken hostage during a visit to a war zone. Brigitte Nielsen, Vivica A. Fox, and Zoe Bell co-star.

Vivica A. Fox
as Raven

Damion Poitier
as Webber
View All

The women are tough and sexy, Olen Ray really has some genuine directing chops, and the movie embraces its cheesiness.

While the US energy corporations conspire to invade Euro markets by demonizing Russia and marginalizing their gas industry, American movies seem to be getting in on the financially lucrative propaganda frenzy too. Charlie's Devils meets The Sexpendables.

Virtually nothing worthwhile going on here. Absolutely bearable, but not absolutely worthwhile.