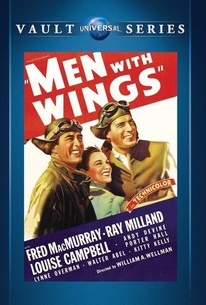 Brash and vigorous director William Wellman always had a place in his filmography for movies glorifying the early years of aviation -- from the start of his career (Wings), until the end (Lafayette Escadrille). But, perhaps, never has his devotion to aviation been made more vivid than in his 1938 drama Men With Wings. Wellman, in this film, attempts to dramatize the history of aviation from the early days of the Wright Brothers until the 1930s, when airline transportation first became viable. The story centers upon two contrasting aviation types: the barnstormer, Pat Falconer (Fred MacMurray), and the methodical scientist of flight, Scott Barnes (Ray Milland). Through these two archetypes, Wellman follows Pat and Scott from childhood to adulthood. Pat marries childhood sweetheart Peggy Ransom (Louise Campbell) and they have a child. Scott, who had always loved Peggy, remains in the background, not wanting to break up his solid friendship with Pat. But Pat is clearly doomed by his recklessness and breakneck individuality. After fighting in the skies during World War I, he refuses to sit back and do the methodical work of flight research like Scott. Always searching for another war to fight, Falconer leaves Scott and Peggy behind, taking off for China to help the Chinese fight Japanese invaders.

Critic Reviews for Men with Wings

The brutal force Wellman achieves in his climactic passages is due, conversely, to the restraint with which he handles them.

The situation isn't a new one. but the picture as a whole is highly dramatic, partly because of the skill and swiftness of William Wellman's direction, partly because there is so much excitement and sheer visual beauty in flight itself.

There are no featured reviews for Men with Wings at this time.