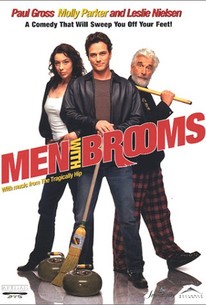 Paul Gross acts as writer, director, and star for this sports comedy about a Canadian curling team. When Chris Cutter (Gross) left his hometown of Long Bay, Ontario, he threw his team's curling stones into the lake and left his bride, Julie (Michelle Nolden), standing at the altar. Ten years later, the curling club's leader, Coach Foley, decides to start up the team again. However, he has a heart attack and dies while trying to retrieve the curling stones from the lake. Returning for the coach's funeral, Cutter fondly remembers his old curling days and decides to follow the terms of the coach's will: to win the prestigious Golden Broom championship. In order to fulfill this goal, Cutter brings the original members of Long Bay Curling Club back together, including mortician Neil (James Allodi), troublemaker James (Peter Outerbridge), and would-be father Eddie (Jed Rees). Chris also reunites with his own estranged father, Gordon (Leslie Nielsen), and gets involved with Julie's recovering alcoholic sister, Amy (Molly Parker). Features original music and special appearances by Canadian rockers the Tragically Hip.

Stan Coles
as Minister
View All

Critic Reviews for Men with Brooms

It makes you believe the cast and crew thoroughly enjoyed themselves and believed in their small-budget film.

Someday, a creative filmmaker may make an involving movie on the unique sport of curling. Men With Brooms, however, is not that movie.

Perhaps not since Nelson Eddy crooned his Indian Love Call to Jeanette MacDonald has there been a movie so unabashedly Canadian, not afraid to risk American scorn or disinterest.

The filmmakers have great fun mixing and matching the game's metaphors. With such gags as a sweat lodge of hot curling rocks, they send up and glorify its rituals all at once.

Serving as director, writer and lead, Paul Gross -- who enjoyed brief fame in the TV Mountie show Due South -- imbues his film with that series' same languid Canadian charm.

While curling enthusiasts may be delighted to see their little-known sport featured in a film, actor-director Paul Gross never manages to make it seem interesting to newcomers.

The plot of the comeback curlers isn't very interesting actually, but what I like about Men With Brooms and what is kind of special is how the film knows what's unique and quirky about Canadians.

Not completely loveable -- but what underdog movie since The Bad News Bears has been? -- but certainly hard to hate.

Call this The Full Monty on ice, the underdog sports team formula redux.

Scores a few points for doing what it does with a dedicated and good-hearted professionalism.

This is a winning ensemble comedy that shows Canadians can put gentle laughs and equally gentle sentiments on the button, just as easily as their counterparts anywhere else in the world.

Audience Reviews for Men with Brooms

Men with Brooms is a decent comedy, with a decent cast. Unfortunately Paul Gross has tarnished the "career" he's supposedly had when he directed the beyond awful "war" film, Passchendaele. Therefore this film is eclipsed by that film. Anyhow, before Passchendaele's release, Gross directed this film, and I did somewhat enjoy it, but it lacked something to make it memorable. The idea for the film was interesting, and the gags are good for what they are, but the script does show limitations and the film could have been better. There some good jokes in this film, unfortunately to due an underdeveloped script; most of them fall flat, and go nowhere. The cast (aside from Gross, cause he's a tool) are pretty good here, and I personally think that if Gross wasn't involved in the film, it would have made quite the difference. For what it is, Men with Brooms is a funny little film, and despite the fact this was directed by Paul Gross, it's not as awful as his later film, Passchendaele. The film does have good comedic elements that for the most part are good, and work well enough to be an entertaining film. Overall not a perfect film, but good to watch with friends. The film has some good laughs, despite the fact it's uneven. Watch Men with Brooms but skip on Passchendaele.

Funny, charming and great to see Leslie Nielsen in something not over-the-top dumb. This movie isn't meant to be a blockbuster full of highly paid actors. It's just a good, well thought out movie, packed with lesser-known actors. That's why I easily overlook the several missed chances at more humor. Luckily there are a few laugh out loud moments which helps.

A wacky, heartfelt and hilarious comedy. A great film. Filled with great laughs, compelling characters, smart lines and lots of music from great bands. The actors have sharp and compelling chemistry. Paul Gross crafts a wonderfully crafted and well-written movie gem. Giving his best and most liketable performance and character since his Tv show Due South. Leslie Nielson is brilliant. men with brooms is a comic dazzeler.

A significant let-down. Can-con is forced into every minimal opening - especially the soundtrack - and I expected something much more intelligent from Paul Gross... or at the very least, that he'd not outdo the Mighty Ducks franchise for sheer disregard for the rules, technique or culture of a given sport. Leslie Nielsen, however, is better in this one than he is in most movies, and the straight-ahead sports movie plot makes one able to stick it out. Barely.