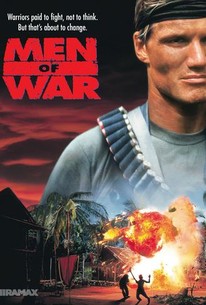 Seemingly content living the life of a derelict, former mercenary Nick (Dolph Lundgren) agrees -- reluctantly and only after he is offered a large fortune from two mining company executives -- to gather up a unit of fellow soldiers of fortune and fly to the island of Jakarta in order to convince local peasants to give up their land. Once he arrives, Nick sees soldiers burn a peasant village. When he learns that the bloodshed is not for the control of such riches as uranium or jade, but for an ancient deposit of bat guano, he changes his alliance and begins fighting for the natives.

Thomas Gibson
as Warren
View All

Critic Reviews for Men of War

There are no critic reviews yet for Men of War. Keep checking Rotten Tomatoes for updates!

Audience Reviews for Men of War

Awesome action film stars muscle-bound Dolph Lundgren as a mercenary assigned to "convince" a group of islanders it's time to move to the mainland (so greedy developers can exploit the island's abundance of guano). Lots of action and machismo make up for great of story.