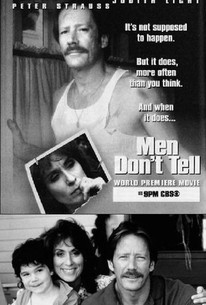 Unique among the many made-for-TV dramas about spousal abuse--most of which are about women victimized by men--Men Don't Tell dramatizes the true story of a loving husband who is terrorized by the violent behavior of his wife. Ed MacAffrey (Peter Strauss) has long endured the physical and emotional abuse heaped upon him by his neurotic wife Laura (Judith Light), not only because he loves her and is concerned over the welfare of his daughter, but also because men are traditionally regarded as weaklings if they allow themselves to be battered by their wives. Even worse, after one of Laura's destructive tantrums brings the attention of the police, Ed is suspected of being the aggressor! Finally, Laura goes too far and Ed tries to defend himself--whereupon Laura crashes through the front window of her home and is rendered comatose, and Ed is arrested for attempted murder. Although the ending of the story could be considered positive and upbeat, it is painfully clear that there are many issues that will never be resolved. First telecast by CBS on May 14, 1993, Men Don't Tell was never rebroadcast on over-the-air television, reportedly because it incurred the wrath of several women's groups. However, the film has since been shown a number of times on cable's Lifetime channel.

Cliff Bemis
as Danny
View All

Laura turned out aggressive, Ed passive. Until she pushes him over the edge. Strauss pulls this one out of a hat. He's very sensitive.

There are no featured reviews for Men Don't Tell at this time.