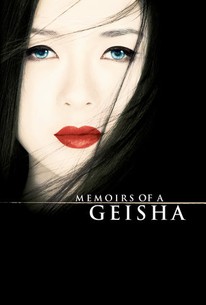 Critics Consensus: Less nuanced than its source material, Memoirs of a Geisha may be a lavish production, but it still carries the simplistic air of a soap opera.

Critics Consensus: Less nuanced than its source material, Memoirs of a Geisha may be a lavish production, but it still carries the simplistic air of a soap opera.

Critic Consensus: Less nuanced than its source material, Memoirs of a Geisha may be a lavish production, but it still carries the simplistic air of a soap opera.

Memoirs of a Geisha Videos

Memoirs of a Geisha Photos

In the years before World War II, a Japanese child is torn from her penniless family to work as a maid in a geisha house. Despite a treacherous rival who nearly breaks her spirit, the girl blossoms into the legendary geisha Sayuri. Beautiful and accomplished, Sayuri captivates the most powerful men of her day, but is haunted by her secret love for the one man who is out of her reach.

Cary-Hiroyuki Tagawa
as The Baron

Kenneth Tsang
as The General

Navia Nguyen
as Geisha in Green

Natsuo Tomita
as Geisha in Lavender

Steve Terada
as Boy on Bike
View All

News & Interviews for Memoirs of a Geisha

View All Memoirs of a Geisha News

Critic Reviews for Memoirs of a Geisha

Memoirs of a Geisha hurts the heart and the brain with its crushing monotony, inert, sub-human dialogue and Marshall's calculated attempt to sell us another Hollywood fairytale of prostitution.

Trying too hard to grab our attention, [Marshall] loses it. The art of the geisha prizes subtlety, stillness, grace. Why doesn't this movie?

The subject remained interesting enough to this provincial American to accept and ultimately enjoy the film's well-worn romanticism, even with its resignedly tired happy ending.

Memoirs of a Geisha is everything you'd expect it to be: beautiful, mesmerizing, tasteful, Japanese. It's just not very hot.

Ultimately, Memoirs of a Geisha compares unfavorably with the book, though it offers pleasures of its own.

... a fascinating glimpse at a lost world of women with skin of porcelain and spines of steel, and the men in their thrall.

Marshall has instead crafted a mildly smarmy, heavy-breathing fantasy about some super-hot babes knocking each other down to get to the man meat while ignoring the fact that they are essentially sex slaves.

Certainly is beautiful to look at, but it holds the audience at bay with one dainty, silk-shrouded arm.

Ziyi's fragile radiant presence lights up the screen, the standout scene being her public dance performance which marks her ascension into geishadom.

It's lush, stylish and a feast for the eyes and ears rather than the heart and soul.

The screenplay was lacking, the characters not engaging, the story dragged on and no real insights on being a geisha. Paul Chambers, CNN.

Audience Reviews for Memoirs of a Geisha

The visuals and technical aspects are indeed spectacular, but the film's flawed narrative, while enjoyable to follow for most of the time, is like a cheap soap-opera that even comes up with a ridiculous revelation in its pathetic, melodramatic last half hour.

Taking on an immense time period and a form of culture that has never been appropriately touched upon, this film does a lot with the book it's based on, creates a wonderful tapestry of history, culture, and most importantly, shows women as commodities. The story begins with a poor little girl in China, who is sold, along with her sister, to a geisha house in a metropolis. She is disconnected with her family, eventually becomes orphaned, and has to move through societal traverses in order to become a geisha, all just so she can survive. The story is not all about her struggles as a woman in a territorial society. The geisha, Sayuri, is also in love with a Chairman whom she met while in her struggles. She is peaceable, quiet, and contemplative at all times, and though she doesn't grow up as a geisha, she acts the part at all times. Zhang Ziyi's performance as Sayuri speaks on the quietness of women in 1920s China, about the art form that exemplified being a geisha, and the taciturn power women held when they used their sexuality as a form of power. There are struggles for power between geisha houses and the women try to gain agency and yet let themselves slip into oblivion time and again and yet feel like they're climbing the social ladder. While Sayuri simply tries to stay in the game in order to win affection and finally be loved, others remotely care about their future as a possible Madame and their link to a future of exploitation. The geisha culture itself is not always explained in the full way it was in the book, and some of that translation is left to be interpreted through intense cinematography, immense sets, period clothing, and the performances from actresses Gong Li, Michelle Yeoh, and Youki Kudoh. It feels and looks as Japanese as a Western audience can expect, but most of the time it felt belabored, longwinded, and far too Hollywood. A Japanese adaptation would have been more powerful, daring, and ultimately may have accomplished what this film lacked. There wasn't much that is learned about what it is to be a geisha from this film except several parlor tricks. As a film that represents history, many of the customs and elaborations weren't correct, and it relied on baseless events in order to drag the film an extra forty minutes in screen-time that it didn't need. The ending was predictable from almost the beginning of the film, but I enjoyed the sappiness of a good love story. Though the film was criticized for using Chinese actresses for Japanese parts, the performances themselves were interesting, especially Gong Li's. The story though is ultimately tried and true, and though this Americanized, saturated version isn't what I expected, it does do what the audience really wants.

Having read the book, I found that the film version of Memoirs of a Geisha was a near flawless film with an incredible story. This film is the perfect example of a love story done right. I felt that the characters truly felt something for each other and the chemistry between Ken Wantanabe and Ziyi Zhang was believable. Unlike most romance films, you feel that emotions between the two characters are real and don't feel corny. Memoirs of a Geisha is a terrific, well acted film. Probably the only weak point of the film is the casting of two Chinese actresses in the role of the leads, Michelle Yeoh and Ziyi Zhang. I thought that this film should have had an all Japanese cast, but unfortunately, it didn't. Despite this small flaw, Memoirs of a Geisha is a stunning film that is beautifully acted, directed and told. Not only that, but the film looks stunning. A beautiful film that I believe is one of the best Romance films of the last ten years. This is better than most romance films in my opinion because I felt the characters in the film had genuine emotions going on. This is a near flawless picture that will stay with you long after you've seen it. Rob Marshall has crafted a beautiful film that has incredible performances and this is overall a solid piece of film.

Memoirs of a Geisha Quotes