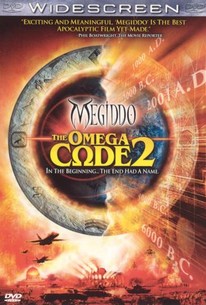 In this combination sequel and prequel to the surprise box-office success The Omega Code, one man becomes the leader of an evil empire that could destroy the world, and his brother must rise against him in the defense of good. Stone Alexander (played as a child by Gavin Fink) is a moody, dark-tempered child whose parents died shortly after he was born. The mother who adopted Stone died several years later while giving birth to another son, David, and Stone is unable to forgive his brother for unwittingly taking his mother from him. Stone goes so far as to attempt to murder David, and their father, prominent businessman Daniel Alexander (David Hedison), responds by shipping Stone off to military school. There, Stone falls under the tutelage of The Guardian (Udo Kier), an instructor at the school who is actually an emissary of Satan. While the enmity between Stone (played as a teenager by Noah Huntley) and David (played by Chad Michael Murray) cools a bit with time, Stone once again finds himself in a bitter rivalry with his brother when they both fall in love with the same woman, Gabriella (played as a teenager by Elisa Scialpi). Stone eventually wins Gabriella's hand and they marry, as Stone (played as an adult by Michael York) rises to power as the ruthless leader of the military arm of the European Union; David (played as an adult by Michael Biehn), meanwhile, becomes a powerful figure in American politics, and is elected to the office of Vice President. What neither David nor Gabriella (played as an adult by Diane Venora) fully understand is that, under the influence of The Guardian, Stone has taken on the role of the Antichrist, and he attempts to curry his brother's favor (and arrange events that will make David president) in a bid for world domination. When it becomes clear to David that the goal of his brother's campaign is to put the world in the power of Satan, David realizes America and its allies must join forces against Stone's troops in a battle in Megiddo, Israel -- predicted in the Book of Revelations as the place of the final battle of good versus evil. Megiddo: Omega Code 2 also features Franco Nero, R. Lee Ermey, and Gil Colon.

Udo Kier
as The Guardian

Delirious, top-notch camp for viewers of all faiths and denominations, Megiddo: Omega Code 2 offers so much goofy fun, it's sinful.

Once the action starts to kick in, Megiddo morphs, minute by minute and scene by scene, into a Mystery Science Theater smorgasbord.

A step forward in budget and coherence from the first Omega Code ... but will still have even much of its evangelical target audience stifling unholy snickers.

What's wrong with Megiddo is not its good-versus-evil theme but the clunky, unpersuasive manner in which it has been expressed.

You'd just about have to give movie cameras to monkeys to make a film worse than The Omega Code.

The English language isn't up to the task of demonstrating how richly, excessively campy [Michael York] is here.

The film's message is delivered with no great subtlety but greater professionalism than the first generation of Christian thrillers.

What message are a group of religious broadcasters trying to send out when they make a movie with the line, 'People believe anything they see on television,' in it?

This is the work of Satan.

There have been many films about Armageddon and most of them suck. This is no exception to the rule ... good eye candy though.

Very, very bad (though sporadically entertaining, like an old CBS Movie of the Week high on millennial jitters).