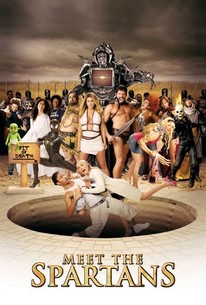 Critics Consensus: A tired, unfunny, offensive waste of time, Meet the Spartans scrapes the bottom of the cinematic barrel.

Critics Consensus: A tired, unfunny, offensive waste of time, Meet the Spartans scrapes the bottom of the cinematic barrel.

Critic Consensus: A tired, unfunny, offensive waste of time, Meet the Spartans scrapes the bottom of the cinematic barrel.

From the creators of Scary Movie and Date Movie comes this tongue-in-cheek parody of the sword-and-sandal epics, dubbed Meet the Spartans. The 20th Century Fox production was written and directed by the filmmaking team of Jason Friedberg and Aaron Seltzer. Sure, Leonidas may have nothing more than a cape and some leather underwear to protect him from the razor-sharp swords of his Persian enemies, but that won't stop the brave leader and his team of 13 warriors from defending their beloved homeland against a powerful invading force that includes the likes of a mutant Paris Hilton, the Transformers, the Ghost Rider, and Rocky Balboa.

Willie Macc
as Urban Kid No.1

Kenny Yates
as Urban Kid No.2

Tony Yalda
as Sanjaya
View All

News & Interviews for Meet the Spartans

View All Meet the Spartans News

Critic Reviews for Meet the Spartans

The result in Meet the Spartans is less classic Mel Brooks than middling Best Week Ever.

This was the worst movie I've ever seen, so bad that I hesitate to label it a 'movie' and thus reflect shame upon the entire medium of film.

It's so bad even Carmen Electra should be embarrassed.

It's a MADtv or Saturday Night Live sketch dressed up in feature-length clothing. It's way too much of an OK thing. And the way-too-much-ness goes on and on.

While there's enough comedic material there for as many as three somewhat tolerable minutes of MADtv, Meet The Spartans gamely alternates between unfunny gay jokes and violent pratfalls for a good 80 minutes.

Meet The Spartans? For those unlucky enough to be lured into the cinema, there's every chance you'll be wanting to meet your maker instead.

What does it say about a film with an hour running time that has twenty minutes of outtakes after the credits to reach theatrical length? Very little that's positive.

While still not a grand work of art, Meet the Spartans improves upon the formula established in the earlier parodies of Friedberg and Seltzer.

It's not very good at all, but I did manage to laugh at some moments of sudden pratfalls and comic violence, but the talkshow reference mentality has to go!

Audience Reviews for Meet the Spartans

OOOOOK this is crap, pure crap, yet there are some scenes which are funny and do work quite well. The amazing thing is some scenes do look pretty good and are worthy of the actual film they are taking the piss out of, to a degree. But the main problem with some spoofs today is they are too spoofy/extreme, too utterly stupid, classic spoofs like 'Naked Gun' and 'Airplane' are daft but they still have a core story and you can follow it. Also the jokes are not just abstract and meaningless they do blend with the main idea and follow the story or match the sequences, these modern spoofs are just too ridiculous. As for Carmen Electra...getting old now and Maguire wasn't too bad actually, beats his 'Eastenders' shit and he does look the part amazingly!.

The piece of cinematic diarrhoea that is "Meet the Spartans" was not worth the﻿ effort it took to make this review. This is quite possibly the only movie i've seen where i've turned it off before I even got half way into the film. Looking back on the experience I wish I had never even started. I remember probably one laugh in what i'd call the worst parody film ever. And thats coming from someone who hasn't even seen the movie it's taking the mick out of (300).

Only five percent of the movie is an actual 300 parody, the other ninety five percent are stale pop culture references and unfunny comedy.