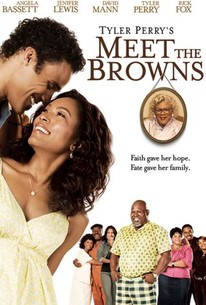 Prolific playwright Tyler Perry adapts his popular stage play of the same name in this family-oriented comedy concerning a desperate mother who connects with the family she never knew. Brenda is a single Chicago mother of three who has been struggling for years to keep her kids off of the streets. Suddenly let go from her job with no warning to speak of, the eternally optimistic mother begins to experience a suffocating sense of hopelessness for the very first time in her life. When Brenda receives a death notice claiming that the father she has never met has passed away, she quickly gathers up the kids and sets out for Georgia to attend the funeral. Upon arriving in the Deep South, the once fretful mother is pleasantly surprised to discover that there is a whole side of the family she never knew existed. A crass but good-natured clan that welcomes Brenda and her children with open arms, the Browns' lazy summer afternoons and frequent trips to the county fair offer a much-needed contrast to the stress of surviving in inner city Chicago. Writer/director/actor Perry reprises his role as indomitable, law-breaking grandmother Madea in a comedy that proves sometimes second chances come when you least expect it. ~ Jason Buchanan, Rovi

Lamman Rucker
as Will

Olumiji Olawumi
as Gang Member No.1

Tom Clark
as Press Member No.1

Tasia Grant
as Press Memeber No.2

Mia Butler
as Woman
View All

News & Interviews for Meet The Browns

View All Meet The Browns News

Critic Reviews for Meet The Browns

Unlike Diary, the drama here is buoyant enough to handle the contrast of its too-silly slapstick.

Meet the Browns is packed with raucous dinner-table banter and broad double takes; sometimes the gags are funny, but usually they're just trying too hard.

To appreciate Tyler Perry's Meet the Browns, there's really only one requirement: Loosen up.

There are a few laughs and some touching moments, but nothing you couldn't get by watching episodes of Good Times and Little House on the Prairie back to back.

Whatever progress the man was making, Browns is a Madea-sized big fat step backward.

Though Browns contains less proselytizing than Perry's previous productions, it is better off for it.

Getting to the end is more chore than treat.

Of the many talented black actresses given a rare chance to shine thanks to Perry's films, [Angela Bassett] is possibly the most talented.

After taking some steps toward maturity and shades of grey in his last film, Perry takes a step backward, retreating to broad schtick and black-and-white formula.

The inner-city melodrama is as sticky as ever, but the downhome Georgia comedy is genuinely funny.

Audience Reviews for Meet The Browns

Meet the Browns is another Tyler Perry film that seems to be so dramatic that people thinks its amazing, but it was just ok for me, its got good acting and an pretty good storyline, but overall it was just an ok movie for me.

Meet the Browns is another Tyler Perry film that seems to be so dramatic that people thinks its amazing, but it was just ok for me, its got good acting and an pretty good storyline, but overall it was just an ok movie for me.

Once an auteur reaches a certain plateau of unmitigated success, there comes the double-edged sword of creative freedom. While this rare privilege grants a few artists the Holy Grail of moviemaking known as ‘final cut,’ it also means that they will probably not hear the word ‘no’ until they tumble back down the industry ladder a la Orson Welles. For example, writer/directors George Lucas (Star Wars) and M. Night Shyamalan (Sixth Sense) never came close to realizing the high standards set by their breakthrough trilogies/movies. Both auteurs, however, followed up their landmark works with scripts that showed promise—-if only they had gone through a stricter editing process. Now a one-man mogul after successes on stage, television, and screen, Tyler Perry presents audiences with a similar dilemma. Meet the Browns shows potential but the scattershot script is all over the place. In this PG-13-rated dramedy, a single mother (Bassett) rediscovers the joys of family after reconnecting with the relatives of the father she never knew. Despite the preponderance of clichés and stereotypes, audiences cannot help but respect the good-hearted charm of Perry’s style. Problems arise, however, when contrivance after contrivance pops up (a coach scouting a basketball phenom in inner-city Chicago just happens to live in the same small Georgia town as the Browns) and the story becomes too cartoonish and slipshod (grandmotherly Madea shows up out of the blue in an OJ-style car chase). It then becomes hard to keep sight of such charm. But who has the gall to take a red pen to a mogul? Bottom line: Take a raincheck.

Meet The Browns is yet another good film from Tyler Perry. I love the Tyler Perry films with Madea...you can always count on quality and a good message. I love Angela Bassett whom shines as a single working mother in Chicago of 3 children. No assistance and getting into some financial problems...enters the Browns...what a crazy family. The Browns help Angela and her children find that family are strong together and can make things all work out.