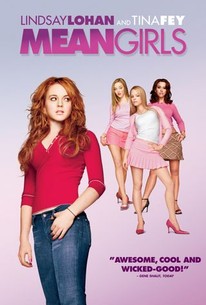 Tina Fey from Saturday Night Live wrote and appears in this comedy about the alternately funny and terrifying pecking order among teenage girls. Cady Heron (Lindsay Lohan) is a 15-year-old girl who has spent most of her life in Africa, where she was home-schooled by her zoologist parents. When her family relocates to the United States, Cady finds herself attending a high school in suburban Illinois, where she gets a crash course in the various sub-strata of the student body: the jocks, the cheerleaders, the stoners, the "cool" kids, and so on. Much to her surprise, Cady finds herself embraced by a clique of rich and popular girls known to outsiders as "the Plastics," led by Regina George (Rachel McAdams), Gretchen Weiners (Lacey Chabert), and Karen Smith (Amanda Seyfried). While Cady is grateful for her new friends, it doesn't take long for her to realize how manipulative they can be, and she soon discovers she's violated an unwritten law when she goes out on a date with Aaron (Jonathan Bennett), who is charming, good looking...and Regina's former boyfriend. It isn't long before Regina and her pals are on the warpath, and Cady must face a level of vengeful behavior for which years in the jungle never prepared her. Joining Tina Fey in the supporting cast are fellow SNL players Amy Poehler, Ana Gasteyer, and Tim Meadows. The screenplay for Mean Girls was based in part on Queen Bees and Wannabes: Helping Your Daughter Survive Cliques, Gossip, Boyfriends and Other Realities of Adolescence, a book by professional youth counselor Rosalind Wiseman. ~ Mark Deming, Rovi

Sharron Matthews
as Joan the Secretary

Fizzes with peculiarly feminine evil, of the kind that comes dripping through a pillowy smirk garnished with baby-pink lipgloss.

Lacks the genuine bile that made Heathers so bracing.

A smart little teen picture that, for a change, actually features recognizable teens.

I would be more amused if the topic of rich material girls had not been worn to a thread elsewhere.

Proof that Hollywood occasionally gets it right

Mean Girls is a funnier and more insightful movie than your average teen comedy.

Speaking to anyone who has survived the jungles of high school, Mean Girls has something for everyone. The refreshingly honest appeal of this film is ageless.

Like Heathers and Clueless, this box office hit turns out to be that rare teen flick that refuses to be pigeonholed as a teen flick.

This is an all-star cast at the beginnings of their careers and their talent is evident even at this early stage.

When we think of the great high school comedies, Mean Girls is near the top of the list because it's so fetch.

Danielle Solzman
Solzy at the Movies
View All Critic Reviews (187)

It probably helps to be the target audience for this or to be able to relate to all the high school groups and drama. It feels a little far fetched at times, from an outside perspective, while other school movies like Clueless or Easy A seemed closer to reality. That being said there are some genuinely funny scenes here and the cast is overall charming and works.

Biting and absurd satire. So many quotable lines! "On Wednesdays, we wear pink." "Irregardless, ex-boyfriends are just off limits to friends. I mean that's just like the rules of feminism." "Gretchen, stop trying to make 'fetch' happen! It's not going to happen!" "Get in loser, we're going shopping." "Grool... I meant to say cool and then I started to say great." "Sorry, we only carry sizes 1, 3, and 5. You could try Sears." "You can't sit with us!"

I enjoyed this far more than I thought I would or should. It's actually a really good movie, like seriously. It's girly of course, but there's a lot of truth behind what's being displayed on screen. I could have gone my whole life without seeing it, and that would have been fine, but the more people talked about it, the more curious I got, especially since this movie was a breakthrough for several cast members I like. I also enjoyed the fact that this had so much involvement from the SNL crowd. Basically, this is a fun and highly entertaining farce that blends Heathers with Clueless and Jawbreaker, but sets everything in the 21st Century. The basic plot follows a 16 year-old girl who grew up in Africa, and spent almost her whole life being home schooled. After moving back to the States, her parents decide that she needs to attend public school to get some much needed socialization. Her world gets flipped upside down when, in her attempts to fit in, she becomes involved with The Plastics- the gorgeous, vapid, and domineering clique of popular girls And this is all about her trying to navigate the strange jungle that is high school- a world more foreign to her than the real jungles of Africa. Give it a shot if you haven't already. It definitely exceeds expectations, and that's coming from my mouth, the mouth of a goofy, offbeat straight man who has a beard and loves history and heavy metal. The film is funny, insightful, clever, and a lot better than it probably has a right to be.

Cady: I know it may look like I was being like a bitch, but that's only because I was acting like a bitch.  "Watch Your Back" I was extremely surprised by how funny, smart, and overall great Mean Girls really was. I've heard from people that it was a good movie and that I should watch it, but it never was really anything that appealed to me. In retrospect, that was an extremely stupid position to take on my part. This film is actually like a splice between Easy A and Heathers, and is just as smart and good as those two films are.  A 16 year old girl name Cady moves to America from Africa where she spent her whole life being home schooled by her researcher parents. When she enters school for the first time, she is an innocent and sweet young lady. Then the plastics get ahold of her. The plastics are a clique made up of three "mean girls" and are lead by the meanest Regina. Cady splits time for a while, being both a bitch and herself. Soon, everything else takes over and she's just a bitch. There's nothing here that I could really complain about. The performances are there. The high school satire aspect of it is there in perfect amounts and at the exact right time. The characters and the writing is strong as well. High school movies like this can sometimes be extremely surprising in how well they exaggerate the true facts about high school and make it into an almost believable story. If you haven't seen this film yet, give it a look. I know it looks like a dumb chick flick, but it is truly much more. No guy should have to be ashamed to say they have seen and liked Mean Girls. It's truly a movie that transcends the chick flick barrier. Girls and guys alike should be able to get a massive amount of enjoyment from watching these characters and listening to their dialogue. It's a really enjoyable film.