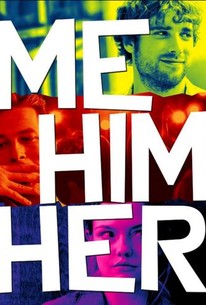 Me Him Her Photos

The directorial debut of Max Landis, who had previously penned the screenplays for Chronicle and American Ultra, ME HIM HER is a madcap romantic comedy about Brendan (Point Break's Luke Bracey), a heartthrob television star who enlists Cory (90210's Dustin Milligan), his shiftless slacker best friend to fly out to LA and help him keep his newly-realized homosexuality a secret from Hollywood. Upon arrival in LA, Cory has a drunken one-night stand with Gabbi (The Leftovers' Emily Meade) and is mostly too busy trying to see her again to help Brendan - despite the fact that Gabbi is a lesbian. With a rowdy cast rounded out by Alia Shakwat, Geena Davis, and Haley Joel Osment, ME HIM HER is a bizarrely endearing high-energy sendup of modern love.

Miles Fisher
as Scotty
View All

Critic Reviews for Me Him Her

What Max Landis' sexual orientation-bending directorial debut lacks in style, it makes up for in self-absorption.

Mr. Landis's sensibility, which combines sitcom jokiness with mumblecore sentimentality, tends to be more grating than amusing in "Me Him Her," though scattered moments will make you laugh.

As scraggly and eager as a teenage cover band fumbling through its first set.

You sense that Landis's brain is a cage full of rabid ideas. Rather than tame them, he's happy to open the gate and let the monsters loose.

The banter has its high points, and some supporting players more than carry their weight. But the second half groans under too many dumb contrivances

Me Him Her has an admirably buoyant energy but a murky message and shortage of laughs.

... a madcap joyride of a comedy that makes for a solid directorial debut and should stand as another achievement in Landis' already colorful career.

Landis avoids the heterosexism of Hollywood rom-coms... Easing past sexual confusion, Me Him Her embraces all sexual identities.

The film's essential good nature and abundant charm may be best demonstrated by its pretty backwash of '80s-influenced electro-pop on the soundtrack and gently mocking cameos by Geena Davis and Scott Bakula.

Me Him Her is the work of someone who lives, breathes, and loves Los Angeles to such a noxiously myopic degree that providing an actual sense of place holds little interest for him.

Me Him Her (the title eschews any punctuation that would separate people) expands the rom-com into social compassion.

While it all initially seems like Landis has lost his grip on the tone, it's not long before we realize he's intentionally going for broke with every single frame.

Audience Reviews for Me Him Her

There are no featured audience reviews yet. Click the link below to see what others say about Me Him Her!

Me Him Her Quotes