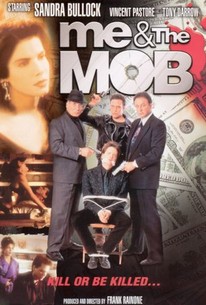 Jimmy Corona (James Lorinz) is related to a bunch of mafia types, sure, but he has always earned his living writing potboiler exposés on the killing of John F. Kennedy. Now his publisher insists that he write something gritty about society's underside instead. This makes the youngish man suicidal, but none of his amateurish attempts to end his own life succeeds. Eventually he decides to seek out his mobster uncle (Tony Darrow), who takes him under his wing. He is just getting into the swing of this new life when he is snared by the cops to get the goods on his uncle's second in command. However, Jimmy's competence and luck in this, as in everything else, soon turns sour, when his body mike starts playing that day's ball game.

Critic Reviews for Me and the Mob

There are no critic reviews yet for Me and the Mob. Keep checking Rotten Tomatoes for updates!

Audience Reviews for Me and the Mob

There are no featured audience reviews yet. Click the link below to see what others say about Me and the Mob!

Me and the Mob Quotes