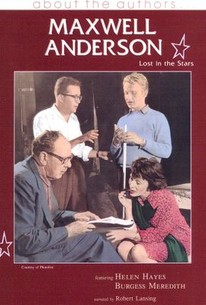 This documentary is named for a play written by Maxwell Anderson, one of the giants of 20th century American theater. The film is an intimate portrait of the Pulitzer Prize-winning Anderson, who was born in 1888 and educated at Stanford University before turning to journalism and then to the theater, where he left a lasting legacy. He penned such classics as "Key Largo," "The Bad Seed," "What Price Glory," "Anne of a Thousand Days," and "Both Your Houses." His dream was to write in verse because he was "weary of plays in prose that never lifted from the ground." After some initial failures, he did compose two successful dramas in verse of +Elizabeth the Queen and +Mary of Scotland. His crowning achievement came with the composition in verse of +Winterset, a poetic tragedy set in contemporary America. The play won him the first New York Drama Critics Circle award in 1935. A verse play of a revisionist view of Richard III was published posthumously. This documentary is narrated by Robert Lansing, and features interviews with Burgess Meredith and Helen Hayes. His friend Ms. Hayes says it best when she proclaims her friend "an American master, a national treasure".

Critic Reviews for Maxwell Anderson - Lost In the Stars

There are no critic reviews yet for Maxwell Anderson - Lost In the Stars. Keep checking Rotten Tomatoes for updates!

There are no featured reviews for Maxwell Anderson - Lost In the Stars at this time.