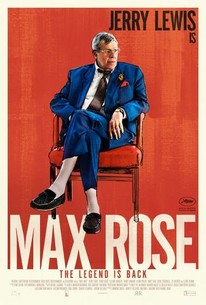 Critics Consensus: Max Rose marks Jerry Lewis' long-overdue return to the screen -- and is unfortunately less than memorable in almost every other respect.

Critics Consensus: Max Rose marks Jerry Lewis' long-overdue return to the screen -- and is unfortunately less than memorable in almost every other respect.

Critic Consensus: Max Rose marks Jerry Lewis' long-overdue return to the screen -- and is unfortunately less than memorable in almost every other respect.

MAX ROSE, featuring the legendary Jerry Lewis in his first starring role in over two decades, is a deeply moving drama about a retired jazz musician whose beloved wife of nearly six decades has just passed away. Though his career wasn't everything he hoped for, Max always felt like a success because his beautiful, elegant Eva was by his side. Then, while going through her effects, he discovers a love note from another man, a shocking revelation that leads him to believe his entire marriage, indeed, his entire life, was built on a lie. Following a period of anger and withdrawal, Max decides to confront the man who "stole" his wife in the hope that what he learns will provide the answers he so desperately needs. A film about reconciling the past, living in the present, and never stopping to plan for the future, MAX ROSE was written and directed by Daniel Noah. Rounding out the cast are Claire Bloom (as Eva), Kevin Pollack, Kerry Bishe, Mort Sahl, Dean Stockwell, Rance Howard, and Lee Weaver.

Jonathan Downs
as Diner
View All

Max Rose, and Jerry Lewis, deserve a better movie than this one.

The movie gains resonance from its look at what may be the final years of a movie legend.

Fascinating at certain moments, especially when Lewis is exploring his character's grief and bitterness, it still feels like a work in progress.

Director Daniel Noah aims at being sad, heartwarming or even humorous, by turns, but almost every scene feels forced and predictable ...

A bummed-out, unfunny Lewis seems to be the main selling point for this dreary drama.

Max Rose is a movie that scoffs at the notion of aging gracefully.

Max Rose is a good farewell to cinema and the world for Jerry Lewis... [Full review in Spanish]

Max Rose adds little to the end-of-life theme, but it offers old-timers in a realistic look at old age, old love, and family affairs.

There's no getting around a script that's a bunch of manipulative claptrap.

[Max Rose] gives [Lewis] a chance to dwell in a favorite realm, the world of hurt, betrayal and rancor.

There are no featured audience reviews yet. Click the link below to see what others say about Max Rose!