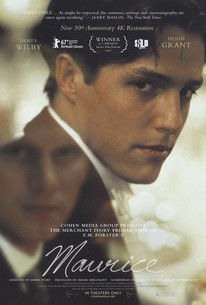 Critics Consensus: Maurice sensitively explores the ramifications of forbidden desire with a powerful love story brought to life by the outstanding efforts of a talented cast.

Critics Consensus: Maurice sensitively explores the ramifications of forbidden desire with a powerful love story brought to life by the outstanding efforts of a talented cast.

Critic Consensus: Maurice sensitively explores the ramifications of forbidden desire with a powerful love story brought to life by the outstanding efforts of a talented cast.

Set against the stifling conformity of pre-World War I English society, E.M. Forster's Maurice is a story of coming to terms with one's sexuality and identity in the face of disapproval and misunderstanding. Maurice Hall and Clive Durham find themselves falling in love at Cambridge. In a time when homosexuality is punishable by imprisonment, the two must keep their feelings for one another a complete secret. After a friend is arrested and disgraced for "the unspeakable vice of the Greeks," Clive abandons his forbidden love and marries a young woman. Maurice, however, struggles with his identity and self-confidence, seeking the help of a hypnotist to rid himself of his undeniable urges. But while staying with Clive and his shallow wife, Anne, Maurice is seduced by the affectionate and yearning servant Alec Scudder, an event that brings about profound changes in Maurice's life and outlook.

Rick Warner
as Judge
View All

This elegant, heart-rending romance is now ripe for the reclaiming as a gay landmark.

With compassion, humor and detachment, James Ivory's superb film of E.M. Forster's "Maurice" takes us into the complacent, fixed world of Britain's privileged classes in the years immediately before World War I.

Wilby cracks the character's genteel surface, releasing bursts of fear, pride, and relief. His Maurice is neither martyr nor saint, radical only in his choice to pursue happiness.

It's woozy, unadulterated romance, an intoxicating tuxedo-ripper set against the elegant priggishness of England's post-Edwardian gentry.

It is difficult to sympathise with [Maurice], however dire his predicament.

A triumph of the Merchant Ivory aesthetic. The cast are gorgeous. The passion is polite. The conclusion is a little surprising. Well worth reviving.

What's really revolutionary about this film is the way Ivory photographs male bodies in what were, by the standards of mainstream cinema at the time, quite explicit sex scenes.

A sumptuous film, whose beauty and importance has only increased with age. The very definition of a must-see.

It's as handsomely mounted as any of its more beloved brethren, especially in a shiny new 4k restoration, but it's no mystery why it was largely ignored back in the day.

A beautifully photographed film with top-drawer performances from a fine cast.

So bored. A story of a young man trying to understand his sexuality, extremely boring but otherwise it has great costumes and a young Hugh Grant.

Is being gay really this boring?