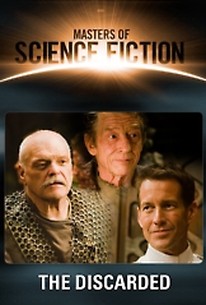 The season ends with Harlan Ellison's "The Discarded." An emissary from Earth (James Denton) arrives on a spacecraft loaded with disfigured outcasts and offers their leader (Brian Dennehy) an opportunity for the group to return home. But there's a catch: They'll have to donate their blood first, because it's needed as an inoculation against a new outbreak of the disease that caused their disfigurement. Jonathan Frakes directed; Ellison has a cameo as Nate. Samswope: John Hurt.

Donny Lucas
as Steve
View All

There are no critic reviews yet for Masters of Science Fiction. Keep checking Rotten Tomatoes for updates!

There are no featured reviews for Masters of Science Fiction at this time.