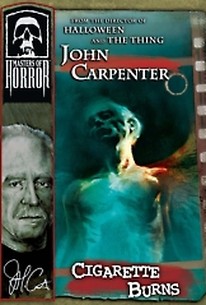 Directed by horror expert John Carpenter, Masters of Horror: Cigarette Burns concerns a man who makes his living hunting down films that are often thought lost. He sets off to find a legendary film titled "Le Fin Absolute du Monde," a movie that supposedly turned the one audience who saw it into a murderous mob. The man begins to fear for his life as he gets closer and closer to his goal.

Christopher Redman
as Willowy Being

Julius Chapple
as Henri
View All

Audience Reviews for Masters of Horror

Allegedly this was a hidden John Carpenter story with an interesting story. The story however loses its way bogged down by a clearly limited budget resulting in a royal mess of a conclusion.