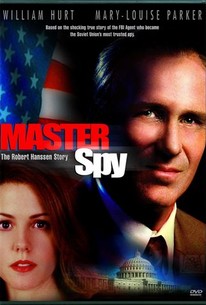 Originally presented in two parts by the CBS network, Master Spy is the true story of Robert Hanssen, a disgruntled FBI agent who, for 20 years, systematically sold out his country to the former Soviet Union. The film depicts Hanssen (played by William Hurt) as hyper-intelligent and hyper-sensitive, frustrated by what he perceives to be the mediocrity of his fellow federal agents (at one point in the story, Hanssen's boss advises him to "dumb down" if he hopes to survive in the agency). Hanssen's self-imposed lofty standards and values are somewhat at odds with his rather kinky sexual preferences, and with his habit of spending far more than he earns. In danger of losing everything he owns due to improvident financial transactions, Hanssen proves to be ripe for plucking by the Soviet KGB, which offers him wealth beyond his wildest dreams if he will simply transfer top secret information to the Russians. Throughout his career of duplicity and treachery, Hanssen enjoys the unswerving loyalty of his wife, Bonnie (Mary-Louise Parker), who remains blissfully ignorant of his double-agent activities until the day of his arrest. Scripted by the inimitable Norman Mailer, Master Spy: The Robert Hanssen Story aired over two consecutive weekends, on November 10 and 17, 2002.

Although the plot is a bit disorganized, William Hurt's performance is not, as he is top-notch.

There are no featured reviews for Master Spy: The Robert Hanssen Story at this time.