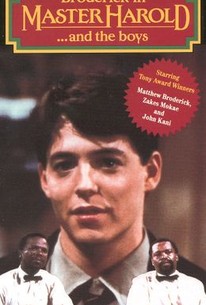 Adapted from the semiautobiographical play by South African author Athol Fugard, Master Harold...and the Boys is set in Port Elizabeth in 1950. "Master Harold" is what the black employees are ordered to call young Hally (Matthew Broderick), the son of a well-to-do white couple who own a fashionable tea room. Hally wanders into the establishment one day and sees two black male workers (Zakes Mokae and John Kani) practicing for an upcoming ballroom competition by dancing together. The two employees and Hally exchange kidding rebukes, not meant to offend anyone. But after Hally receives some bad news about his father, he takes out his anger upon the workers. Efforts to smooth out the situation erupt into an all-out racial conflict. Though running a scant 75 minutes, Master Harold...and the Boys seems twice as long, making one wonder what it was about the original 1982 Broadway production that so overwhelmed the critics. Still, it is easy to see why Zakes Mokae won a Tony award for his performance. This TV version of the Fugard play first aired in the U.S. on November 12, 1984, over the Showtime Cable Network.

There are no critic reviews yet for Master Harold...and the Boys. Keep checking Rotten Tomatoes for updates!

This TV movie is based on a South African play, and it's a really good story, but it doesn't make for a great film. It felt like a play, and it was all very small and somewhat boring at times too. Overall, the story is very good, but the film version of it could have been a lot better.