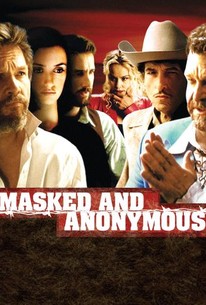 Set somewhere, sometime in an unnamed country, torn by civil war with unclear battle lines, impresario Uncle Sweetheart is scheming to find a headliner for a benefit concert. The purpose of the concert is unclear and the charity that the profits go to is its promoter's pockets. Nina Veronica is the veteran TV producer whose job it is to make sure that the concert is an international spectacle--yet her task is impossible to achieve. And when Uncle Sweetheart manages to get the iconic cult star Jack Fate released from prison to perform, the stage is set for tumult.

Christian Slater
as Crew Guy No. 1

Chris Penn
as Crew Guy No. 2

Susan Tyrrell
as Ella the Fortuneteller

Dan Frischman
as Eddie Quicksand and the Ventriloquist

Noel Gugliemi
as The Inmate

Perla Walter
as The Caretaker
View All

Critic Reviews for Masked and Anonymous

A strong contender for the worst movie of the century.

Far from the greatest story ever told.

The stellar but misguided cast ... is simply painful to watch as the doomed vehicle it's trapped in comes whistling toward a fiery crash landing.

Had I caught this atrocity back in 2003 when it was initially released, it would have seriously challenged The Cat in the Hat and Bad Boys II for one of the top spots on my 10 Worst list.

Bloated by self-regard, Masked and Anonymous is the essence of the self-aggrandizing benefit concerts it weakly parodies.

Dylan does about a dozen songs with his tight juke-joint band, and it's worth sitting through the rest of the nonsense for both the music and for Jeff Bridges, in Fisher King mode as Dylan's nemesis.

An ego-maniacal and purely vain ode to Dylan who attempts to make himself larger than life amidst these cameos of great actors.

Only the scenes of Dylan on stage really hold the attention.

...read as a collection of moments, mortared together with some stirring music, both from Dylan and his band and from others on the soundtrack.

Audience Reviews for Masked and Anonymous

Another movie that not many people seem to have heard of or seen. A low budget one week wonder shot by the BBC with a charitable cast that reportedly worked for free, I can guarantee that you have never seen a movie quite like this one. Bordering on a metaphorical bio-pic of my hero Bob Dyaln (Jack Fate) and hovering above the apocalyptic backdrop of a war torn (supposedly third world) country, Masked and Anonymous analyses the true nature of human behaviour. Starring Mickey Rourke, Jeff Bridges, Bob Dylan, Ed Harris, Luke Wilson, Val Kilmer and John Goodman just to name a few, this film is disturbing real and aside from Bob singing through out, sometimes in English and sometimes in Spanish, this movie is acceptionally memorable and deserving of praise that it rarely receives.

Strange, allegorical film about the state of politics in America... I think. Almost defies review.