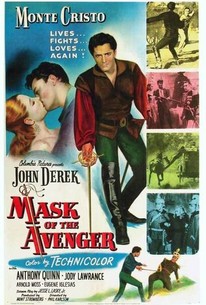 Mask of the Avenger Photos

Auteur theorists may have trouble discerning the "signature" of director Phil Karlson in the Columbia costume adventure Mask of the Avenger. John Derek stars as Capt. Renatu Dimorna, the son of an Italian aristocrat, who vows revenge after his father is murdered during the European political upheaval of 1848. To this end, Dimorna becomes a dashing Robin Hood type, swashbuckling his way throughout Italy. His principal rival is a traitorous military leader (Anthony Quinn), who is also Dimorna's rival for the affections of a beautiful woman (Jody Lawrance). Production values are quite good in Mask of the Avenger, belying the picture's modest budget.

Critic Reviews for Mask of the Avenger

Mainly dull swashbuckler with good costumes and an allegorical attack on McCarthyism.

There are no featured reviews for Mask of the Avenger at this time.

Mask of the Avenger Quotes