The Mask of Dimitrios1944 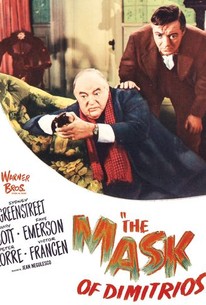 The Mask of Dimitrios Photos

Zachary Scott made his screen debut in this clever bit of film noir that has gained a cult reputation in recent years. Dutch mystery novelist Cornelius Leyden (Peter Lorre) is travelling through Istanbul when he meets Col. Haki (Kurt Katch), head of the secret police and a big fan of Leyden's work. He offers to tell Leyden about Dimitrios Makropoulos (Zachary Scott), a notorious criminal whose body was just found washed up on the beach. It seems that Makropoulos was involved in nearly every sort of lawless act imaginable, from murder and blackmail to espionage and political assassination. Fascinated, Leyden decides that Makropoulos would be a fine subject for his next book, and he begins researching his life, beginning with Haki's dossier on the criminal. Leyden's research takes him through much of Europe; while en route by rail to Sofia, he meets a large man with an ingratiating chuckle, Mr. Peters (Sydney Greenstreet), who informs Leyden that "There is not enough kindness in the world," and tells him of a good hotel in town. Grateful for the advice, Leyden checks in, only to later find Peters ransacking his room and holding him at gunpoint; it seems that Peters had business with Makropoulos, and he isn't entirely convinced that the master criminal is dead -- especially since his body was found with shabby clothes and no money, and the police in Istanbul had never actually seen a photo of Makropoulos. Based on a novel by Eric Ambler, The Mask of Dimitrios also features Faye Emerson, who was in the news at the time, as she had just wed the son of President Franklin D. Roosevelt.

Philip Rock
as Person on Beach

Rita Holland
as Person on Beach

Rola Stewart
as Person on Beach

Frank Lackteen
as Officer in Smyrna

Critic Reviews for The Mask of Dimitrios

The trip is interesting. [Full review in Spanish]

Romanian-born ex-painter Negulesco aims for sophistication with Hitchcockian banter between rivals -- Lorre and perennially suspicious Sydney Greenstreet -- and a crafty Wellesian figure of hearsay in Dimitrios.

"The Mask of Dimitrios" may get bogged down with its storytelling structure, but don't let that keep you from enjoying yet another amazing encounter between Greenstreet and Lorre.

Warner Bros. could crank out smashing suspense films like this one on a regular basis during the 1940s.

Audience Reviews for The Mask of Dimitrios

There are no featured audience reviews yet. Click the link below to see what others say about The Mask of Dimitrios!

The Mask of Dimitrios Quotes