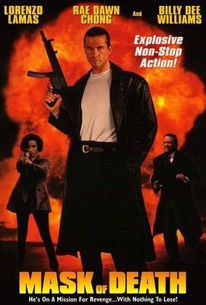 In this crime thriller, a detective's face is destroyed when he is shot by a hit man. With nothing left to lose, the gumshoe agrees to undergo radical reconstructive surgery so that he can resemble an FBI fugitive who has connections to the Russian mob. The ensuing plan of action involves a rendezvous with a Russian operative and the pilfering of a valuable microchip.

Critic Reviews for Mask of Death

There are no critic reviews yet for Mask of Death. Keep checking Rotten Tomatoes for updates!

Audience Reviews for Mask of Death

There are no featured audience reviews yet. Click the link below to see what others say about Mask of Death!