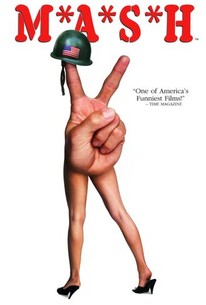 Although he was not the first choice to direct it, the hit black comedy MASH established Robert Altman as one of the leading figures of Hollywood's 1970s generation of innovative and irreverent young filmmakers. Scripted by Hollywood veteran Ring Lardner, Jr., this war comedy details the exploits of military doctors and nurses at a Mobile Army Surgical Hospital in the Korean War. Between exceptionally gory hospital shifts and countless rounds of martinis, wisecracking surgeons Hawkeye Pierce (Donald Sutherland) and Trapper John McIntyre (Elliott Gould) make it their business to undercut the smug, moralistic pretensions of Bible-thumper Maj. Frank Burns (Robert Duvall) and Army true-believer Maj. "Hot Lips" Houlihan (Sally Kellerman). Abetted by such other hedonists as Duke Forrest (Tom Skerritt) and Painless Pole (John Schuck), as well as such (relative) innocents as Radar O'Reilly (Gary Burghoff), Hawkeye and Trapper John drive Burns and Houlihan crazy while engaging in such additional blasphemies as taking a medical trip to Japan to play golf, staging a mock Last Supper to cure Painless's momentary erectile dysfunction, and using any means necessary to win an inter-MASH football game. MASH creates a casual, chaotic atmosphere emphasizing the constant noise and activity of a surgical unit near battle lines; it marked the beginning of Altman's sustained formal experiments with widescreen photography, zoom lenses, and overlapping sound and dialogue, further enhancing the atmosphere with the improvisational ensemble acting for which Altman's films quickly became known. Although the on-screen war was not Vietnam, MASH's satiric target was obvious in 1970, and Vietnam War-weary and counter-culturally hip audiences responded to Altman's nose-thumbing attitude towards all kinds of authority and embraced the film's frankly tasteless yet evocative humor and its anti-war, anti-Establishment, anti-religion stance. MASH became the third most popular film of 1970 after Love Story and Airport, and it was nominated for five Academy Awards, including Best Picture and Best Director. As further evidence of the changes in Hollywood's politics, blacklist survivor Lardner won the Oscar for his screenplay. MASH began Altman's systematic 1970s effort to revise classic Hollywood genres in light of contemporary American values, and it gave him the financial clout to make even more experimental and critical films like McCabe and Mrs. Miller (1971), California Split (1974), and Nashville (1975). It also inspired the long-running TV series starring Alan Alda as Hawkeye and Burghoff as Radar. With its formal and attitudinal impudence, and its great popularity, MASH was one more confirmation in 1970 that a Hollywood "New Wave" had arrived. ~ Lucia Bozzola, Rovi

The finest American comedy since Some Like It Hot, the Mr. Roberts of the Korean War, The Graduate of 1970, and the film that has been expected from director Robert Altman for some short time.

M.A.S.H., one of America's funniest bloody films, is also one of its bloodiest funny films.

For me, M*A*S*H contains as much depression as humor.

This is still watchable for the verve of the ensemble acting and dovetailing direction, but some of the crassness leaves a sour aftertaste.

In the end M.A.S.H. succeeds, in spite of its glaring faults.

A good (but not great) comedy about the calculated idiocies of war precisely because it is a human and ultimately humane movie.

M*A*S*H is a comedy of military humor, with a tear here and there, plenty of gags, and fun dialogue. [Full Review in Spanish]

Tends to slide about like a joke book on a rollercoaster, taking its dark laughter more or less where it finds it.

What lingers is the Army's sexism. At first it's exposed but the story soon indulges in the humiliation of women. M*A*S*H* remains enjoyably irreverent but falls well short of the counterculture, anti-establishment war-satire it could've been.

As a savage comedy about man's rebellion in the face of death it has rarely been bettered.

It's Altman at his irreverent, hilarious best.

Robert Altman's film about wartime Korea actually has very little to do with Korea and everything to do with the counterculture revolution, circa 1968 or so, going on in the good old U.S. of A. So its the squares against the hippies more or less, with the backdrop being the blood and guts of that nigh forgotten "police action" (that mainly presaged our other police actions all across the globe). Practically the best thing about this film is how, while capturing the zeitgeist of the times, the swing of the societal pendulum towards liberalism, it also predicted the fall of that same as well because none of the "cool" and "smart" guys actually have anything better to offer in terms of an answer to societal woes.

Altman's anti-war classic is a delicious satire - irreverent, subversive and downright hilarious -, with a perfect episodic structure for the sort of anti-establishment vibe it aims for and making the most of its compositions (the Last Supper gag is hysterical) and overlapping improvised dialogue.

While certainly the humor is dated, M*A*S*H is still witty and smart, and has an episodic format that works well.

The staff of a mobile army surgical hospital work and play near the front lines of the Korean war. Robert Altman's satire was released just as the tide of public opinion had began to turn against America's presence in Vietnam and is clearly an analogy for the war, but unlike most other stories rooted in that particular conflict, M*A*S*H doesn't have any real moral message or even plot to get your teeth into. It's a loose collection of sketches in which double act Elliot Gould and Donald Sutherland crack wise, play practical jokes, football and golf in between stints in surgery. And that's it. It's never even particularly funny; more mildly amusing than laugh out loud funny (although Roger Bowen's distinctly unmilitary camp commander did raise a few chuckles from me) but it is always entertaining. Successful enough to spawn a long running TV sitcom, M*A*S*H is a fun if slight diversion that'll amuse but never change anyone's world.