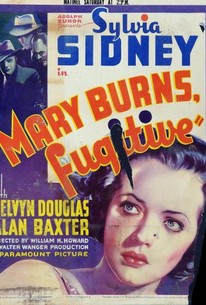 An innocent but admittedly none-too-bright victim of circumstance, Mary Burns (played by perennial movie victim Sylvia Sidney) is inexorably sucked into the vortex of organized crime. She tries to escape her murderer husband Babe Wilson (Alan Baxter), but it's a losing proposition, especially since the newspapers have already branded her a gun moll. Making matters worse, she is thrown into prison for crimes committed by her husband (understandably, since her behavior at her trial was self-defeating to say the least). Though believing her guilty, detective Harper (Wallace Ford) allows Mary to escape from jail, hoping in this way to track down Wilson. Nominal hero Alec MacDonald (Melvyn Douglas) isn't much help; not introduced until the film's halfway point, he spends most of his time in a hospital bed, recuperating from an injury. In fact, the story is wrapped up only after MacDonald is rescued by the heroine! ~ Hal Erickson, Rovi

Kernan Cripps
as G-Man
View All

An odd angle on the G-man yarn, with an amazing performance by Alan Baxter...

It seemed that Mary Burns was no brighter than she should have been. However, she was very attractive to watch, and the picture has plenty of thrills.

There are no featured reviews for Mary Burns, Fugitive at this time.